Walk: Lune Riverside walk from Bull Beck picnic site, Caton to centre of Lancaster. Linear path, but there are circular walks too, off the path, through woodland and fields.

Good walk for dogs off lead, though beware of cyclists.

The River Lune Millennium Park stretches some 15km along the banks of the Lune from Salt Ayre in Lancaster to Bull Beck near Caton in the heart of the Lune Valley. With unusual artwork and interpretation, the park offers various walks and cycleways.

This is the walk I followed today rather than do the path to Lancaster. Bull Beck isn’t marked, but the picnic signs on the right shows where it is. You can carry on towards to Lancaster as far as you want and there are other circular routes. I tend to follow my nose and found two or three good walks.

I always park at Bull Beck and never done the full 15km to Lancaster, except on a bike many years ago. It’s a good dog walk if it’s wet and muddy and they can be off lead.

Bull Beck is located on the A683 Kirkby Lonsdale to Lancaster road, just east of Caton. It is sort of tarmacked with quarry bottom and a few large “potholes”have appeared, but can be navigated around. Parking is free and there’s a small cafe there that serves bacon butties and steaming mugs of hot tea plus a lot more. There are picnic tables too. Loos are available at 20p a pee and it can be a gathering for motorcyclists which can be a real sight.

This is the beginning of the walk. It is well signposted and there are information boards.

This is the path and as I said, flat, level and tarmacked and great for everyone. Can get busy with people, kids, dogs and bikes.

The path is dotted with art work and signs and statues. I really like this one.

Then there’s these guys just lying around by the River Lune.

And this one, which I need to find out more about. If you know, answers on a postcard please!

This part of the path is known as the Crook O’ Lune and a popular tourist area. The River here does a huge u-bend and within yards there are two bridges to cross it. If you look at the above OS map you can see where it almost doubles back on itself.

This is the road bridge across the River Lune which runs parallel to the Millennium Path. The river was flowing very fast today.

The day has been overcast all day with rain this morning. It’s still quite cold for the end of March, but I noticed that the trees and bushes are just starting to bud. Spring seems a long way off, though the clocks go forward this weekend – we lose an hour in bed but gain an hour of daylight in the evenings.

Below the Millennium Bridge and the beautiful wrought iron work. I’ve dropped off the path and starting to walk through the fields alongside the River Lune back to the car.

If you stick to the path, there is another watering hole called Woodies a little further on. Not the most glamorous places, but they serve a very good cuppa and anything that goes into a bun! Small nominal charge of £1 for parking and again toilets. 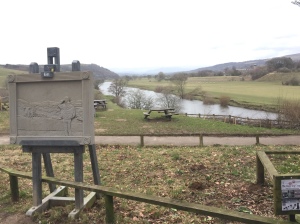 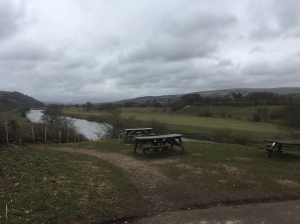 And not a bad spot to sit to eat your butty and sup your tea. This looks east towards the Yorkshire Dales and hidden in the distance in cloud, is Ingleborough, one of the Three Peaks of Yorkshire. It always seems to be shrouded in cloud and even on the most beautiful day, can have a little cap of cloud. Apparently JMW Turner, the artist visited here and painted.

Along this section, there’s seems to be a lot of waterworks and associated buildings. This is the flow management building apparently. It is such at odds with its surroundings and I love the way it’s on it’s own little pillar. It does flood here, believe me!

Just love this. Makes me wonder every time I walk past. All that metal work and signage to tell you to beware – danger, but a few feet along, you can happily fall into the drink and be in Lancaster before you can say ” oops, I’ve fallen in!”. In reality I think there’s a little weir or drop of some sort and I bet it’s to prevent idiots trying to negotiate their way across it thinking it’s stepping stones. But it’s still odd in the acres of space here.

Further along you come to a rather fancy bridge which essentially just carries water pipes across the River Lune, but in that grandiose Victorian style. Think this is a pump house, but look closer and it’s got a fancy stone plaque on the side. It’s in the middle of a huge sheep field and in the middle of nowhere. So elaborate. 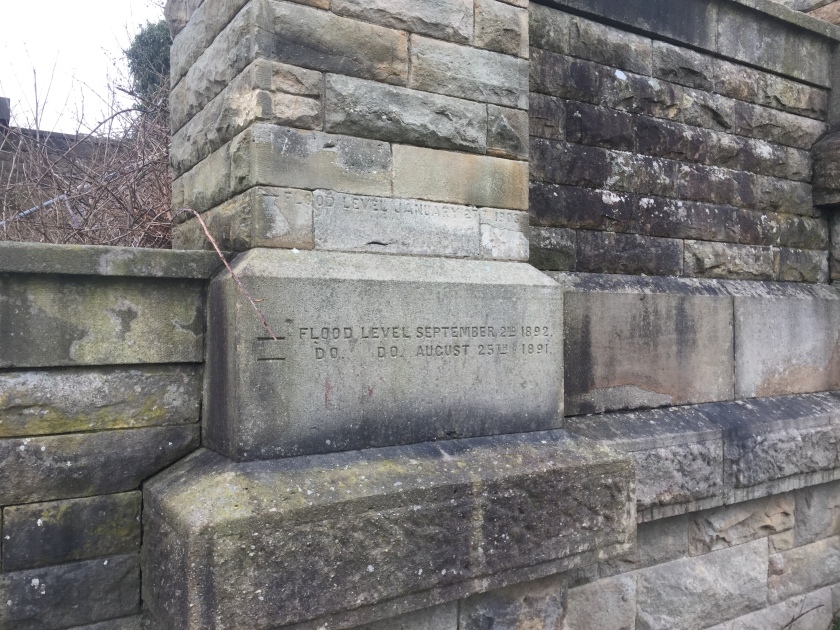 Also on this isolated bridge, there are stone plaques marking the height and date of floods from the 1800’s and after the 2015 floods, thought “well, it’s always flooded badly, what are we get excited about?”………………… 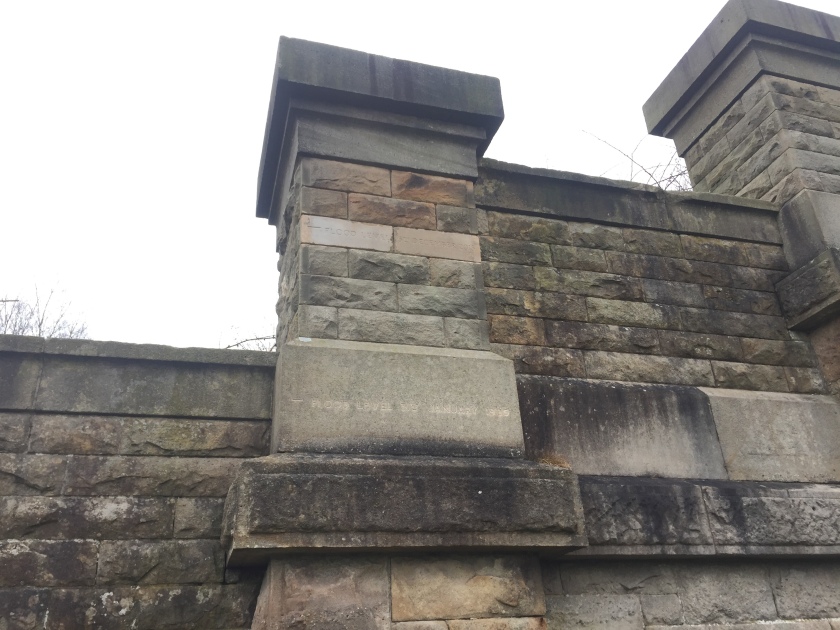 The two newer stones at the top of the picture are the new 2015 flood levels……..

And to put it all in perspective, the 1800 one is my first photo. I think we do have something to get excited and worried about!

The bridge in all its glory! Just to carry water pipes. Maybe it wasn’t for that purpose, but there seems to be no roads and there’s a steep incline on the other side and it’s quite wide. A bit of a mystery. You can walk across the bridge as there’s a footpath on the other side to,take you back to the Crook of Lune. The Dog hates crossing it as it’s a metal mesh pathway and she’s scared of it. Got a funny little gait as she crosses which is hilarious.You can see the 2015 flood level so it must of been terrifying and covered swathes of land.

No idea what these are. There are three of them spaced out across the field close to the bridge. Must be for something and maybe hark back to the waterworks.

The fields are full of lambs and their mums and it’s a lovely sight. I just love lambs and how giddy they get when they get together. It’s my favourite time of year to see the newborns. I have felt for them this week as last weekend we had thick snow agin, albeit for just a day which is typically British, but fancy being born in such conditions. However, they were enjoying life today despite the low cloud and general drabness and brightened up my day.

A nice stretch of the legs and got some air. It’s a lovely little walk with different options depending on your mood. If you stick to the path to Lancaster, you come across the little village of Halton and the busy M6 motorway crosses over above, with huge concrete pillars and dripping water. A bit spooky, but fascinating. Beyond that, you enter the suburbs of Lancaster following the River Lune into Morecambe Bay. Enjoy.