We’re off pretty sharpish this morning as there’s not much to see in Thurso – shops that every British High Street has got and we’re not town people really.

Our first port of call is a few miles up the road to Castletown where there’s the Flagstone Trail and Museum. Sadly the museum is shut until 2pm and we peer through the gates at a pretty cottage garden and a lovely little building. It’s the first place I’ve actually liked in appearance and wished the rest of Caithness could be the same.

The Trail was a path interspersed with faded information boards and the remains of the flagstone mills were in disrepair and being overtaken by weeds and trees. We wandered down to the harbour area and to another building which was open to the elements. We went inside, but it was dark, gloomy and filled with rubbish. We half expected to find a homeless person in there and I looked for needles, fearing for The Dog’s paws. Oh for just some funding and this could be a great little tourist place. It is hard as this part of Scotland is so far from anything, so there are not the milling crowds of the Lake District or the Yorkshire Dales, so nothing is really developed to a grand scale. But tourism would be a great bonus. It’s a vicious circle and there are no easy answers.

We drive up to Dunnet Head, the most Northern point of mainland Britain, through flat farmland and dotted communities. There is a lighthouse here, freshly painted in white and yellow, but closed to the public. World War Two has visited here too with the flat roofed buildings scattered around. Again, it could be made into a proper tourist attraction. 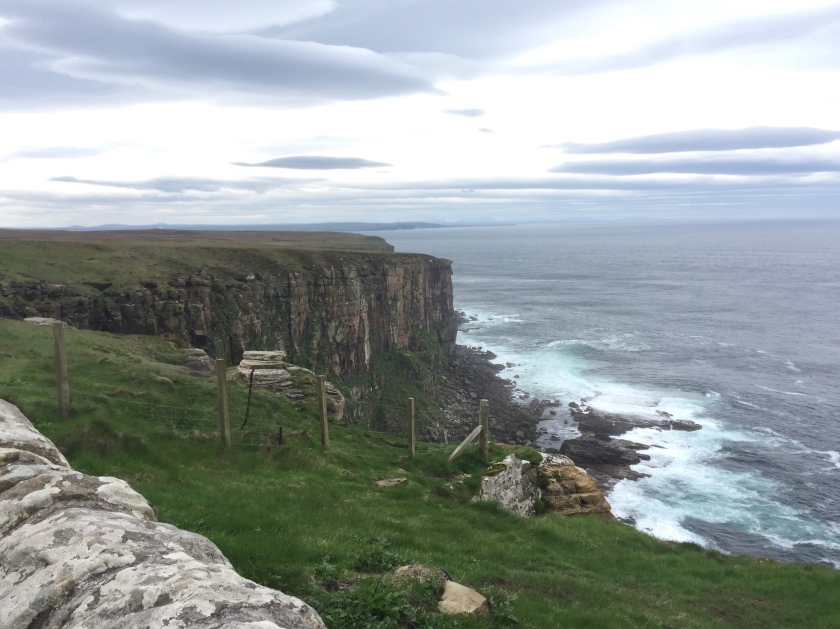 The views here are fantastic with a 360 degree vista. It’s very windy (nothing to stop it) and very cold. The layers are back and the woolly hat has made an appearance too. We walk up to the trig point and some information boards. It’s so windy it’s even making our dog’s short ears flap wildly. It’s quietly beautiful in a strange way and weird to think that this is the end of Britain and looking south, there’s some 700 miles to the other end.

We saunter back to the motorhome and chug onto John O’Groats. This is a strange place. A mere hamlet if anything, with some fantastic holiday chalets clad in wood and look very modern inside. Then a parking area surrounded by low level buildings housing a tourist information, a few cafes and other outlets, but a few units are empty and gives you the impression it’s struggling a bit. The eponymous sign is there with a small queue while some bike riders photograph each other several times indifferent poses. Beyond that is the harbour where buckets of crabs were being unloaded and to the left, an imposing hotel with brightly coloured cladding at one end. And that was about it.

We walked into a well stocked shop which seemed to sell every piece of tat possible. It was possibly bursting. We sat in its scruffy little cafe and had a sausage sandwich and a coffee. Then a quick visit to the tourist information for camping information, which was equally overwhelmed with merchandise and we took our leave, cursing after spotting a more convivial eating house nearby. Maybe the cool, overcast weather didn’t help, but John O’Groats looked scruffy and downbeat, and was there for just one reason. It could be so much better.

We headed to Duncansby Head which also had a lighthouse, brightly painted and wandered across the grasslands to see the Duncansby Stacks, huge rock towers left stranded when the sea washed it away. To our delight, we walked past a thin inlet which is habited by nesting birds and amongst the squawking masses was a little puffin. Another one to cross off the list. By now the sun was winning its battle against the heavy clouds and it started to warm up. We had a lovely stroll to overlook the stacks and along the cliff edge, watching the birds. We jump back in the motorhome and pick up the A99 and head south.

There are good views to be had across the fields to the coast with castles and brochs to be seen. We drop down into Keiss and discover a fine little harbour with the harbour offices still intact and built of stone. We pick up a path and walk to Keiss Castle, a derelict, but mainly intact building perched on the edge of the cliffs and nearby a tall, imposing Manor House. Here we see seals basking on the rocks. It’s very scenic and impressive. 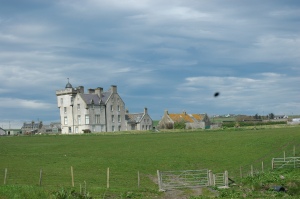 We retrace our steps and continue to Wick for a campsite. We find it on the outskirts between a railway line, a river and an electrical sub station. To get it we have to do a detour unless we want to rip our roof off with a low level bridge. It’s not floating our boat and not wanting yet another town stop. So we plough on, passing a possible stop at Loch Hemspriggs which is right by the main road and looks boring and boggy. We drive down a side road to Sarclet to eat a late lunch and look out to sea towards the oil and gas rigs and the bases of an intended wind farm. The sun has lost its battle with the clouds and retreated. At Lybster, we drive through its ridiculously wide, but handsome Main Street with its terraced stone houses (though some have been pebble dashed! It should be a criminal offence) and drop down into its little harbour. What a little gem of a place and it gets better as there’s a cafe and it’s open. The lady in charge was about to shut up for the day, but insists on making us coffees and ends up chatting to us for ages. It snuggles into a little inlet, the harbour is neat and tidy, the cafe is part of a large old warehouse with a small museum and a lighthouse on the end. We wander around, so pleased to find this little hidden treasure and wondered how many came to visit it. 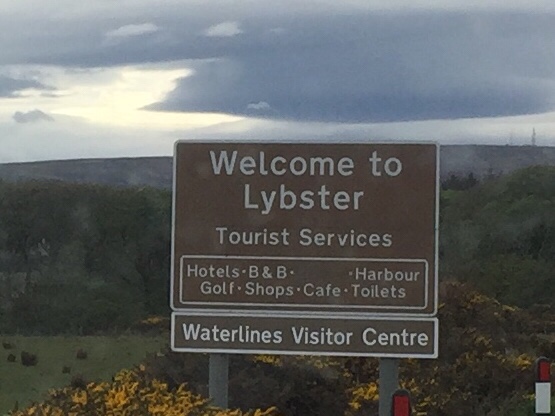 It was such a welcome change from the flat, monotonous, uninspiring, treeless countryside we’d been through. Treeless fields with bungalows that stuck out like sore thumbs. Sorry Caithness. Now the landscape was starting to undulate and trees were making a comeback. We drive to a small hamlet of Dunbeath and just off the A99, a delightful little campsite and B&B. A tiny little site with probably no more than a dozen pitches, it had the most wonderful shower block. I’m not one to frequent these places, preferring the privacy of the van, but here you had your own modern and clean bathroom (one of three) and I relished it.

We sat outside chatting to a Dutch couple as the sun re-appeared again and relaxed. We had started to rate the campsites on our route and this one was winning by far. Just perfect and I spot a plover. Good day for wildlife. Big hills and fells beckoned in the distance as well as some dark brooding clouds. At 10pm to stretch our legs,we strolled up the lane and remarked on the strange twilight – we all had faint shadows. On the return, we studied the rigs far out to sea, now glowing with light, which was quite ethereal.

We crash out tonight. The Dog doesn’t need to. She’s looked shattered all day and given up on her guarding of the motorhome. Her diet has been as nearly as bad as ours and we’ve lost count on how many sausages have passed her lips. Hey ho, that’s what you do when you’re on holiday.

Tomorrow we inch further down the coast towards Inverness.