A change of plans.

Again it’s overcast and cloudy, but it’s not raining!!!

After the usual tea and biscuits, we decamp and drive to Portmahomack, a pretty little harbour village out on the peninsula beyond Tain. It’s lovely with views back to the high fells and traditional cottages curving around the bay. After yesterday, we’re eager to relieve the cabin fever and waddle along the beach. It’s a good bracing walk, but the wind is cold still and layers and hats are the de rigeur. 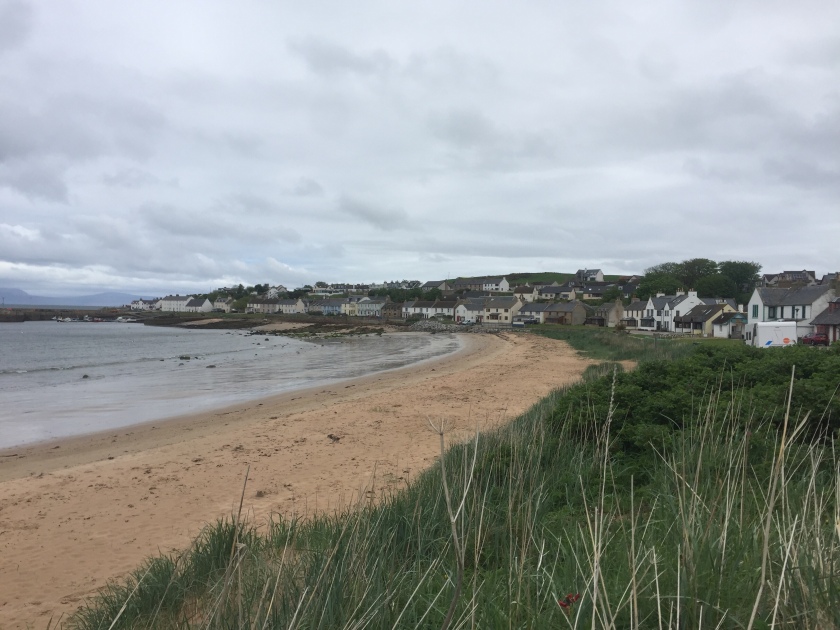 We had planned to go to Tain Ness, but it’s even further and in the wrong direction. Means that we would have to drive all the way back. The guide book says it’s got a lighthouse and you might see dolphins, but it’s a long way just for that. So we ditch that idea and decide to check out the Black Isle as someone has told us that a bakery in Cromarty does stonking rock cakes. So we drive back to the A9, catching glimpses of the oil and gas rigs moored outside Invergordon. I felt like dropping down to see them, but thought there would be better views from the other side. Despite the name, Black Isle is still part of the mainland and not detached at all. Why it’s called that, I’m not too sure. So we trundle on, briefly visiting a town called Alness, which has won Britain in Bloom and I was hoping to see a street festooned in flowers and brilliant colours. But it was bare and was an ordinary little town – decent enough, but not enough for us to stop and one of many we had already seen. I did expect some floral display too.

Disappointed, we rejoined the A9 and make a decision. According to the guide book, the Black Isle has nothing particularly intriguing for us to make a huge detour and we are getting a little bored with the gentle undulating scenery. It’s pretty and lovely, but we prefer the raw, breath taking mountains on the west. So after a cuppa and croissants in a lay-by, we map out our route. We set off towards Dingwall, a lovely little town and back towards the Ord of Muir and Beauly, where we stopped last week at the beginning of our trip. We had sort of done the Scottish 500 – technically you’re suppose to go back to Inverness, but hey ho. Beauly was still lovely and we resisted revisiting the little deli – bad timing as we had just munched through croissants and other pastries. We take a back road towards a place called Crannich as we had seen signposts for the Bog Cotton cafe. We seem to drive for miles, and we were back onto the old single track/passing place sort of road. The signs for the cafe had stopped and we were fearing the worse! We didn’t have much food on board and it could be a bit of a funny lunch. But with a huge cheer, the signs re-appeared and we were soon sitting down and ordering. It’s still overcast and moody. The Bog Cotton cafe is next door to quite a nice looking campsite, nestling in the woods, but it also looks like it could be Midge Central. 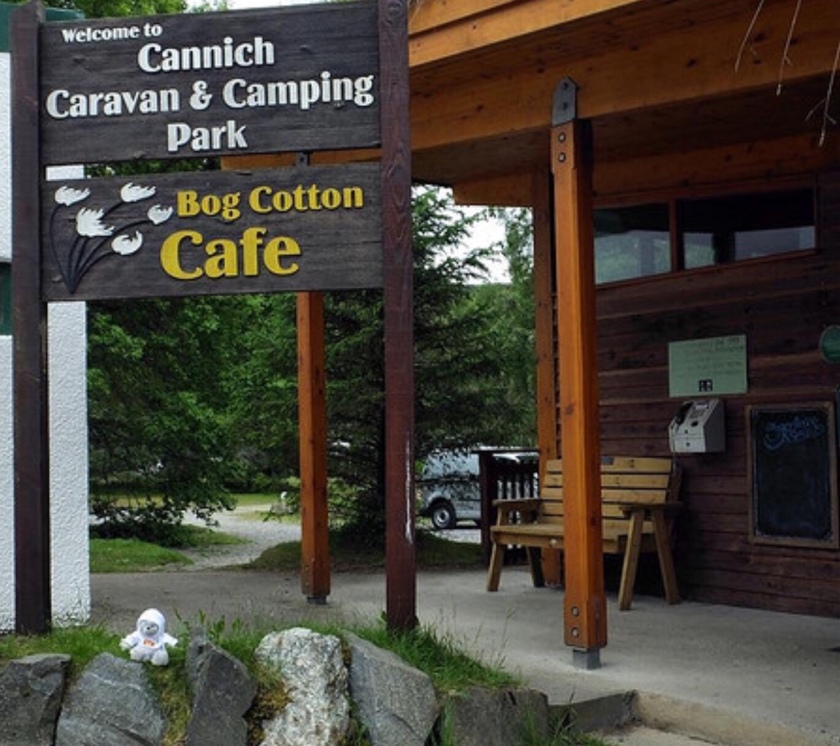 We had stocked up with more insect repellent than someone traveling in the depths of a Borneo jungle and had rattled around like a sub branch of Boots the Chemist, but we had timed this trip right, and seemed to be ahead of the midge season. This campsite looked like it could be a night mare in the summer. Anyway, it was a bit early for us to be booking in, so with hubby wanting to take me up Glen Affric, we bounced our way up the valley. It’s quite a way to a spot he knows and along the way, we pass huge hydro electricity stations, some quite elaborate and decorative. But between the trees, power lines scathe their way through and my heart sinks. All the way along this road, there are warning signs for construction traffic and there’s obviously major work being carried out for some reason (probably for the hydro electricity). Ugly access roads scar the surrounding beauty of this stunning valley. It’s quite atmospheric with the low cloud seeping it’s way through the trees and hanging on the peaks. The cottages and villages are pretty here too. This is the type of landscape we love and we enjoy a good hours walk through the woods. What would it look like on a sunny day, if we’re wowing about it in this dank weather. Apparently it’s even more stunning further up the valley where it’s gets really remote. One to return to, I think.

We retrace our steps back to Crannich, despairing of man’s ugly footprint and thankfully we haven’t met anything large like a construction vehicle. We drop down to Loch Ness and head to Fort Augustus for the night. Once there, we find the proposed campsite closed and under new management. Our hearts drop. We need a rest, so we wander Fort Augustus with its stunning lock system in the centre of the village and stroll down to Loch Ness itself. It’s a bit of a honeypot for tourists, so it’s full of the usual shops which are now closed for the day. After our stretch, we quickly google for another site. There’s one at Invergarry, further down towards Fort William. The Dog sighs heavily as we lock her in and share our sympathy with her. 10 miles later, we pull off onto a side road and climb up a little track. Where is this going? It twists and turns, and we seem to be heading up the side of the mountain. But then, it flattens out, we turn right and we find the most delightful, quirky campsite. Nestling in a clearing, it’s high in the forest, with individual camping areas, a good fifty foot plus from the next people. Each one has a picnic table too. Our initial reservations soon melt away, though we are concerned that we are quite close to a pond and fear midges may be lurking. We do the van ablutions – the chemical toilet is housed in little shed reminiscent of the little loo Grandpa Potts uses in the film, Chitty Chitty Bang Bang. It makes me love this place more. 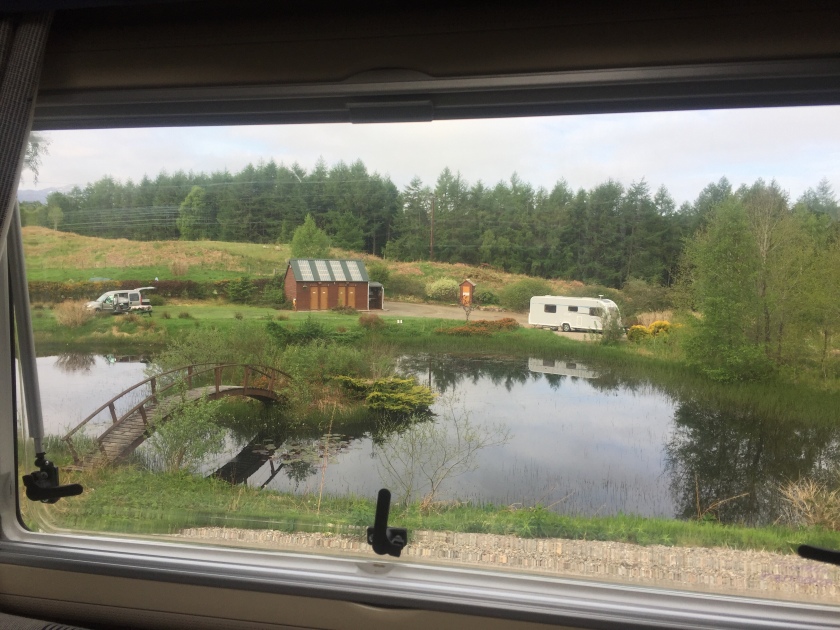 We have been a big fail on the food front and have to scrape the bottom of the proverbial barrel or in this case, fridge. It’s cheese, mayo, and very limp leaf sandwich accompanied by wine and peanuts for pudding. To make it worse, we have no biscuits for the morning as we munched the final two in an earlier trauma today. We have been pretty hopeless with our food planning and not very organised.

We decide to take The Dog on a forest walk which she thoroughly deserves today as the light starts to fade. Cloud still envelopes the mountain tops and not much can be seen. A couple with their dog have the same idea and accompany us on our walk. We follow the path until a large gate and see deer wandering across the field beyond. It’s getting darker now and we turn heels and head back. It’s 10.30 by the time we reach our little pitch, but not quite dark. We sit outside in the gloom and finish of the bottle of wine, feeling quite content with ourselves.

Sorry for the lack of photos today. It just wasn’t a photographic day, weather wise. In tomorrow’s blog, you’ll probably get an overload………