I needed to take The Dog for a walk, but wanted something different for our usual haunts.

After pouring over some maps, I chose to visit Clapham, a small village on the edge of the Dales and just off the A65 road. The plan was to walk out of the village and up onto the surrounding fells.

I had done my ablutions, eaten breakfast, washed up and prepared myself for the walk, when I noticed The Dog was still curled up in a tight ball on one of the armchairs. Technically, she’s not supposed to do this, but over the years she has taken advantage of the house’s open plan design by stealth. At the beginning, as you got out of bed, you heard a thud as four paws landed on the carpet and by the time you got down, an innocent looking dog lying on her dog bed as if she had been there all night. A still warm cushion gave the game away. Then she got bolder and as we came downstairs, she was in the process of getting off the sofa with a luxurious yawn and extravagant stretch. The next stage was watching you come down the stairs and watching you go into the kitchen with a sleepy eye and the beginnings of rousing. Now it’s a blatant “don’t you disturb me” look as she remains curled up, refusing to move at all and only getting up when she’s ready.

I was ready with her lead before she decided to get up today – I think she would of stayed there longer – and we jumped into the car. We parked up on the road in the centre of the village and headed off. We walked up past the church and started up a steady incline, under two bridges, one quite dark and gloomy. I had a steady pace, The Dog was off lead and the sun shining. Then I noticed The Dog wasn’t running ahead and checking out smells as her usual habit. I turned to find The Dog stopped and looking at me quizzically. I called her and carried on, but she remained unmoved. A couple more encouragements failed to get her bounding up. Like most dog owners, I started firing questions at her as if she would give a full blown answer of her reluctance, but her face spoke “a walk up there? Really?” I started to walk back down and she leapt up delightedly and legged it down the hill……….

Realising I had neglected this Blog for awhile, I decided that I should start posting again, albeit a small one and start at Clapham. We walked to the pretty little church of St James and was delighted to find it open. English churches are often open and unattended, which allows you to wander in and admire the majesty of the building. The tower is Norman but the rest of the building dates from the 19th century. This was lovely with whitewashed walls and ceiling, beautiful stained glass windows and wooden pews. Outside I wandered about the gravestones, reading them and appalled at the devastation families suffered. One large stone, listed at least four children passing away between the ages of 5 and 20 years. How awful is that? But then the parents lived to 75! I just love these stones, with the elaborate font and detailed information – “here lies George, son of John and Gertrude Smith, born 25th September 1850, died 20th January 1857aged 6 years and 4 mos. Also his sister, Mabel, second daughter, born 8th July……….. ” and so it goes on listing all the family deaths, on a huge engraved stone. Today you would get “George Smith, 25.9.1850 – 20.1.1857. RIP” on a little black plaque.

We wandered down towards Clapham Beck that runs through the village, allowing The Dog to have a paddle and a good drink. Then we followed our noses. We found a waterfall further up and then the entrance of the Ingleborough Nature Trail. There’s a small charge of £1 from an ugly car park style machine and a lengthy notice board which allows you to follow the trail up towards Ingleborough Cave where another large chunk of money is extracted to enter the said cave. There’s plenty of other footpaths around, so I declined and carried on our exploration of the village. 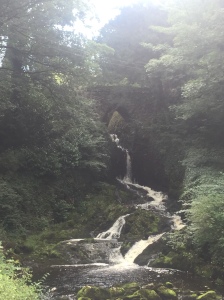 Clapham is the home of the Farrer family whose Ingleborough estate was established in the 19th century. One of the family, one Reginald Farrer was a notable botanist and the family has maintained much of the beauty and charm of the village.

The Dog and I wandered down footpaths and ginnels, found the lovely little primary school, noted how close Clapham is to the busy A65, admired the Clapham Cave Rescue headquarters, a jarring modern building which could of been a bit more sympathetic to its surroundings, but nonetheless very important, saving hapless souls off the nearby fells, peaks and caves. 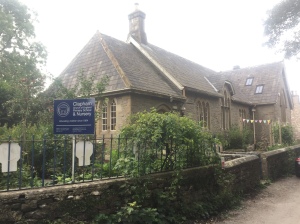 Wandering back to the car, we found a little vintage shop, stuffed full of antiquities and other bric and brac. Surprisingly, she was happy to allow The Dog in considering the amount of china and glass in the vicinity of swishing tails. Luckily The Dog is brilliant in shops and developed a suitable “I’m bored” look as I studied the merchandise. I made a mental note to do either two things – my sister in law loves vintage meccas like this and I had a dilemma. Not to tell her of its existence or bring her here for the day while I go off for a lengthy coffee and iced bun in the cafe next door and pick her up when she’s bought up the whole shop and the owners can go for a round the world cruise for six months. (Actually she would probably run it while they’re away!). Joking apart, it was very well stocked and needed a good rummage through – if I didn’t have The Dog (who had now spotted the resident cat) I would of lingered a lot longer.

The cat gave The Dog one of those sneering looks that cats specialise in – “Bring it on, mutt. You’re on a lead and can’t get me so I’ll just really wind you up by sitting here and licking my bum”. Which it did. 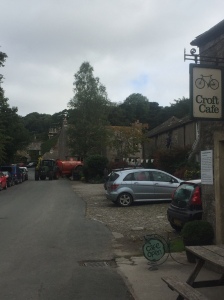 By now, we had exhausted the possibilities that Clapham could offer us. If you want to avoid the masses in other more popular Dales places, this is perfect this time of year. I wandered around the sleepy streets, the tidy little houses and bungalows and the few little shops – the little village store run by community volunteers (just love that), the tiny little cafes, a tiny wool shop and the aforementioned vintage shop. The pretty beck and the whole genteel, very quiet and gentle atmosphere. I think it gets busy in the summer months and the weekends as walkers park up to walk up nearby Ingleborough and the cave systems while the less energetic head up the Ingleborough Nature Trail (there’s a Yorkshire Dales National Park carpark, so Clapham does entertain quite a few visitors who soon disperse into the surrounding countryside for the day, leaving the village to carry on with life).

Just a lovely little gem worth a couple of hours for a bit of downtime.