It was one of those horrible rainy days when all you want to do is put a blazing wood fire on, pull up the settee and watch a good war film like Dambusters or The Great Escape and basically not move.

But move we did. A couple of weeks ago, I came across a flyer advertising an Open Day at Hornby Castle. For the last couple of years, we’ve been meaning to go to the Open Day in May (they only open to the public two or three times a year) and every time, there’s some other important distraction that occupies us. So we made the effort. 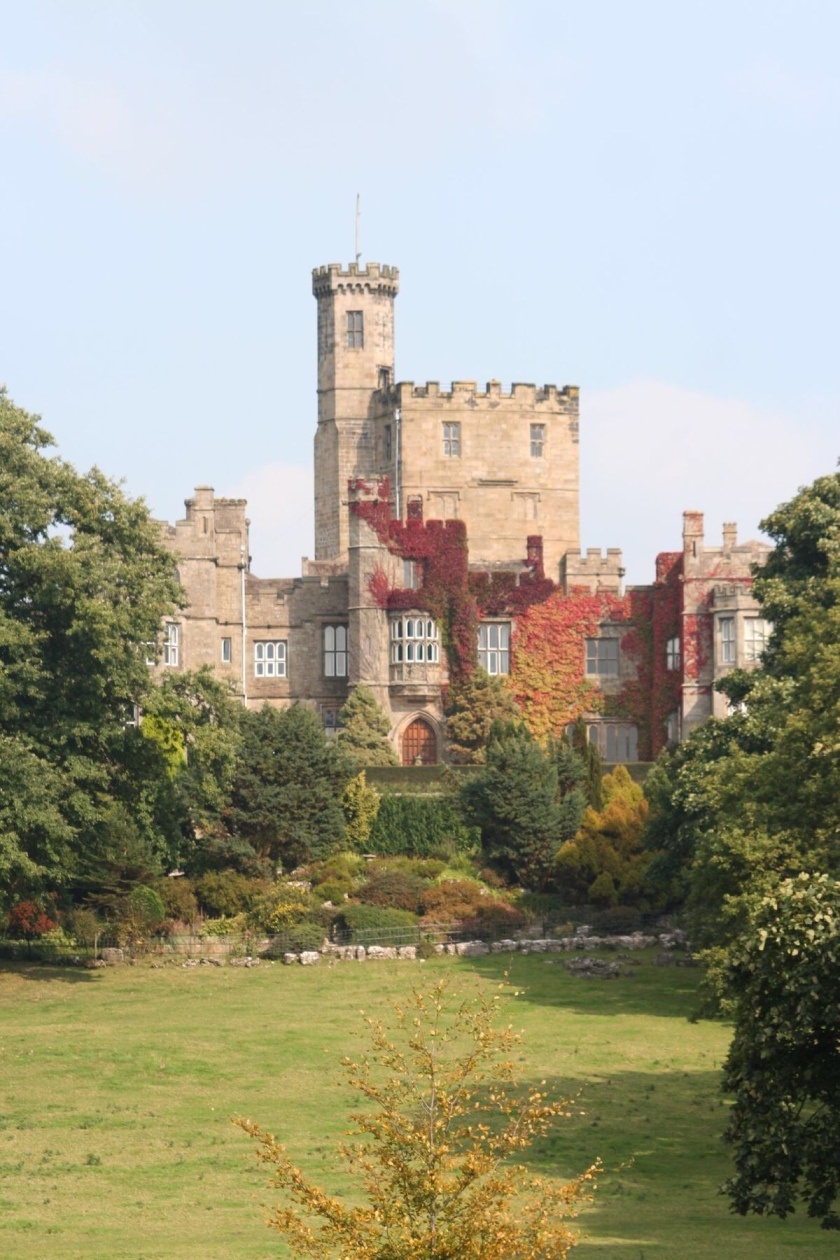 The rain was coming down in steady stair rods, so we donned woolly jumpers, cagoules, waterproof trousers and sturdy boots. It was odd having so much clothing on after our fantastic UK summer where having shorts and t-shirt seemed overdressed. Now we were padded out like sumo wrestlers and had trouble moving.

We parked on the street, not sure if we could park inside – there’s signs saying “private grounds”, as Hornby Castle is a private residence. So we played it safe, not wanting to do an excruciating many point turn in their driveway, crushing prized plants as we did so. We wandered down the path to be met by a lovely, but rather damp lady sheltering under a gazebo, who took our money, and gave us a quick run down of what was on offer.

We set off and dropped onto the woodland path to let The Dog have a good sniff and check for squirrels. She was firmly on lead. She wasn’t impressed with the weather either and regularly shook off the excessive, giving us brief showers. We wandered around the grounds, lamenting it would be beautiful in the sunshine. We came across the walled garden and the nursery, got chatting to the gardener who was retiring and huddled under his gazebo too. It seemed to be getting darker.

The gardener was selling off his tools to any one who made him an offer. Hubby picked up something suitably sharp and dangerous, carrying it around under his arm. We hoped we wouldn’t get challenged for carrying an offensive weapon, but as we were the only fools out in this weather, the chances were pretty low.

We also found a ceramic workshop in the grounds and a chance to get out of the rain. There was an Aladdin’s cave of ceramic pots, bowls, dishes and many other designs. We dropped into conversation with the owner as we perused and saw a beautiful dark blue bowl with an inscription inside for a stupidly low price. On enquiring, we were told that it was a reject as the edges weren’t straight or some other defect. To me, it was perfect and quirky. I like things slightly off centre, so we bought that too along with an incense bowl which was also a reject. The chap wrapped them well in bubble wrap and into a large paper bag, whereupon we asked him to look after them and we would pick up later. The sky had just got blacker, the rain heavier and I had images of the bag disintegrating within minutes and my quirky purchases either smashing or rolling off down the hill.

We found the riverside path alongside the River Wenning and followed that until the “private” sign barred us. We retraced our steps, stood agog at a recently fallen beech tree which had ripped its way through the surrounding woodland, crashing across the path. It had been chopped up, but you could see its trajectory from high up and surviving trees still standing, but boughs and branches cruelly ripped off. The remains of the strickened tree lay by the path, huge slabs that would made beautiful table tops and other pieces of furniture. I love wood and this was in its purest form, with beautiful markings and lines. We stood there for awhile, quite amazed by the beauty of nature.

We headed up and came across the castle proper. It’s not really a castle now, more of a rather large grand house with a terrace looking down the Lune Valley, a pretty vista through the trees and rainy mist. We realised there was a historical talk here at 3pm, so a brief walk back to collect my bowls and we arrived at the imposing front doors.

It was here we had dilemmas. Where to put the tool and what to do with our rather wet and unimpressed dog. The first was solved by hiding the tool in the adjacent shrubbery and the second, by hubby opening the huge oak door to be met by a small friendly lady. Yes, the dog was welcome she thought. So we walked into a large tiled hallway, and stripped off our wet outdoor clothing and The Dog had a couple of extravagant shakes to disperse her collection of water. Then a man appeared and seemed to baulk at the idea of The Dog dripping on his carpets. After a little debate, one of which was to leave our dog in the hallway – not an option on our dog’s part, a large and very hairy dog bed was produced as we all went into another room and sat down. The Dog was not impressed to having to sit on another dog’s smelly, hairy bed and had to be forcefully coaxed on to it. We were the only people here.

Hubby sat in a high backed chair, me on the floor next to the Dog almost nailing her down and hoping she wouldn’t have another shake. This room was straight off from the hallway and I presume would of been a reception room. It was full of mismatched, saggy sofas and chairs that these houses always seem to specialise in. Numerous paintings hung off the walls, a huge fireplace dominated a wall, while floor to ceiling windows, partly stained glassed, took another wall. It was a pleasant room and evidently part of the living quarters of the current owners.

The lady turned out to be the matriarch of the family that made Hornby Castle their home, and once the seating and dog had been sorted, she sat opposite on one of the baggy settees and set about talking about the history of Hornby Castle. And how fascinating it was. She started with William The Conqueror and the castle being a fortified placement, and carried through to the present day, cataloguing the numerous calamities and owners through its chequered history, how it was fought over, taken over, nearly demolished several times, left derelict, saved, owned by feckless landowners, loved and rebuilt by eccentric wealthy industrialists. Richard III, Oliver Cromwell, Henry VIII, and other historical characters had touched this place, tucked as it was in a remote corner of the NorthWest of England. We were amazed by its chequered past. The Castle had been changed and altered throughout its life, it’s castle exterior eradicated when it was styled more into a Georgian house for more permanent living rather than for defensive purposes. Victorian additions were soon added, but in the 20th century, those extensions were removed and it now retains a Georgian gothic look and is more house than castle in that sense.The lady was amazing and her talk so detailed. Even The Dog finally relaxed and slept on the dog bed, despite another couple appearing during the talk, with their little white hound. Our Dog was not impressed by this invasion and told the other dog, by a series of low level growls and a brief bearing of teeth that this dog bed, despite probably been the property of many boisterous Labradors was now firmly hers and to Back Off. We have a strange dog.

As the talk continued, we became aware of the sun shining through the windows and as we left through the impressive front door, the full vista and views of the Lune Valley finally showed themselves to us and it’s was amazing. We gathered up our stuff, lamenting how sad it was that the good old British weather had scuppered the Open Day, noting just two cars parked on the field. We had only met about three other people for the two hours we were there. It was such a shame.

We headed home after reclaiming the tool from it’s hiding place. Despite the brightening evening, we lit a blazing wood fire, pulled up the sofa and put a good war film on telly…………