After days of overcast cloudy weather, the sun shines and the skies are blue.

I’m trying to incorporate a dog walk with some errands. Finally I decide to stretch our legs along the Leeds Liverpool Canal from Rodley to Apperley Bridge in Leeds.

The Dog and I drive there after our jobs. We pull off the outer ring road at Rodley and park up near the canal. There’s limited parking, but it’s free. We find one of the last spots and wander to the canal side, where a long line of canal boats are moored. On one side, it’s open fields, on my side there’s a clutch of houses and a small cafe operating out of a stone shed, alas closed today.

So off we set, the Dog dashing up ahead and me peering into the canal boats. There are a couple of really pretty, well cared for boats today – all clean and shiny. We follow the path towards Apperley Bridge, leaving the housing behind and the open valley of the River Aire. The valley is a classic lesson in physical geography – a railway, the canal, the River Aire and electricity pylons marching in between, only the road is missing, sitting on the hill above. Workmen are on the railway and there’s a plaintive bleeping alarm sounding across the fields which increases as a train approaches, warning the workers to clear the line. Then once it’s safe again, the alarm returns to its sedate bleeping. It follows us up the valley. 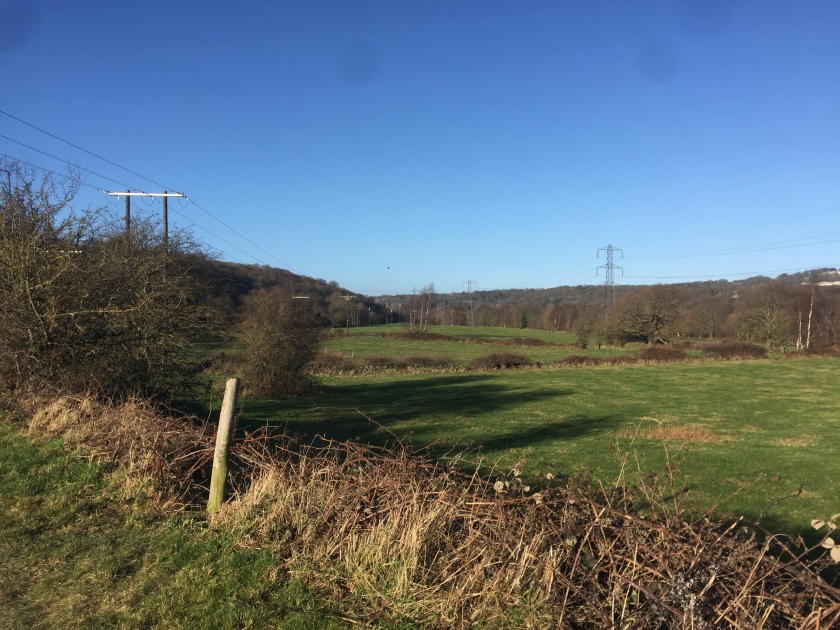 We go through a wooded part, The Dog running ahead, trying to find the little ramps that let her paddle in the water. No swimming today. There’s a brisk wind and it’s cold. Despite this, there are quite a few people walking, jogging and cycling along. I keep an eye out for cyclists as The Dog is off lead. Cyclists come in many forms – the worst being young men and the Mamils (middle aged men in Lycra). The former ride fast because they can, the latter think they’re still young bucks, racing the sprint finish of the Tour de France. Either group owns a bell or a tongue. They are upon you before you realise, whizzing past, not a hint of slowing down. “Watch out, there’s a dog…….” I splutter after them. Then there’s the women and older man, sedately cycling or at least slowing down, tinkling their bells or calling out gently. Most of the time I’ve spotted most of the cyclists coming and have The Dog under control long before they arrive, getting the odd thanks in appreciation as they pass. There seems an inordinate amount of them today, a small handful ignoring cycling etiquette when sharing with pedestrians.

We’re on the edge of suburbia, though you wouldn’t know it, the houses, shops and industry hidden from view above us. To our right the Leeds suburbs of Rawdon and Guiseley; behind the woods on our left, Calverley and the conurbation of Bradford. This is the valley taking trains to Morecambe, Lancaster, Manchester and other northern cities, the valley of fields and woods I mention in my blogs, that venture deep into Leeds before succumbing to warehouses and city life. We pop out of the trees, back into fields and distance woods. The railway comes close to the path here and we see the railway guys working on the rails. Two adults swans glide majestically on the canal, a respectful distance from their teenage cygnets, all stubby and brown. The youngsters are losing their ugly duckling persona, their white feathers overtaking their fluffy brown down, transforming into graceful birds. The Dog ignores them, after being being hissed at and pricks her ears up at an oncoming train, before giving it a half hearted chase. 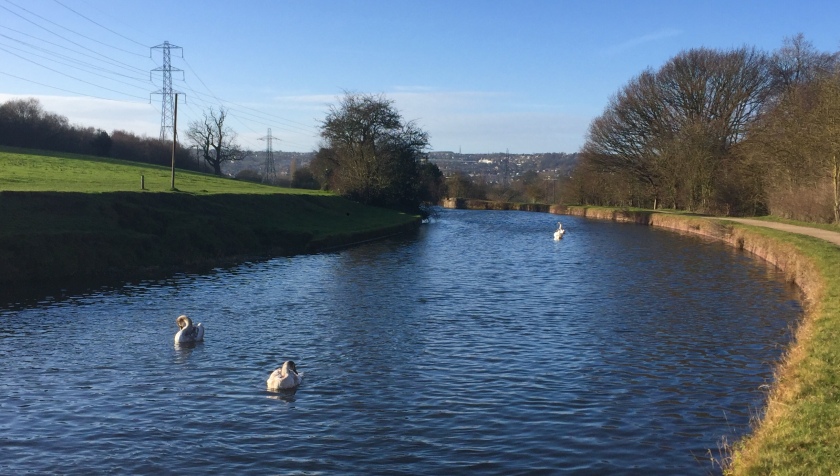 The sun is warm in the sheltered parts, but the wind is eye wateringly cold and I’m walking into it. We enter the outskirts of Apperley Bridge, on the edge of Bradford. It seems full of modern housing and this past year or two, estates have been popping up all over. The only good thing, is they have been built on former factory and warehouse sites, but the whole area seems a mass of identikit houses as far as the eye can see. We pass under the main road connecting Leeds and Bradford, pass the marina and across another road. Here a huddle of stone cottages overlook a vast double lock, together with the Canal and River Trust offices, probably once the lock keepers cottages. We peer into the murky depths of the lock, look into the open door of the Canal and River Trust offices – nothing exciting – and carry on where we’re soon back into fields and farmland.

We walk a bit further, up past a farm abutting the towpath, full of equestrian paddocks and stables. They have diversified with a little cafe, but the last few times I walked up this far, they have been firmly shut. Today was the same. I’m not sure if my timing is awful or they have shut up shop permanently. I hope they haven’t and will be open again. For once I am organised with money on me for refreshments, but I’m thwarted from having a warming mug of coffee (and maybe a slice of fruit cake). It’s so dispiriting when you work yourself up for coffee and cake, and denied at the last moment. Sighing The Dog and I wandered up to where the railway bridges cross the canal and took stock. 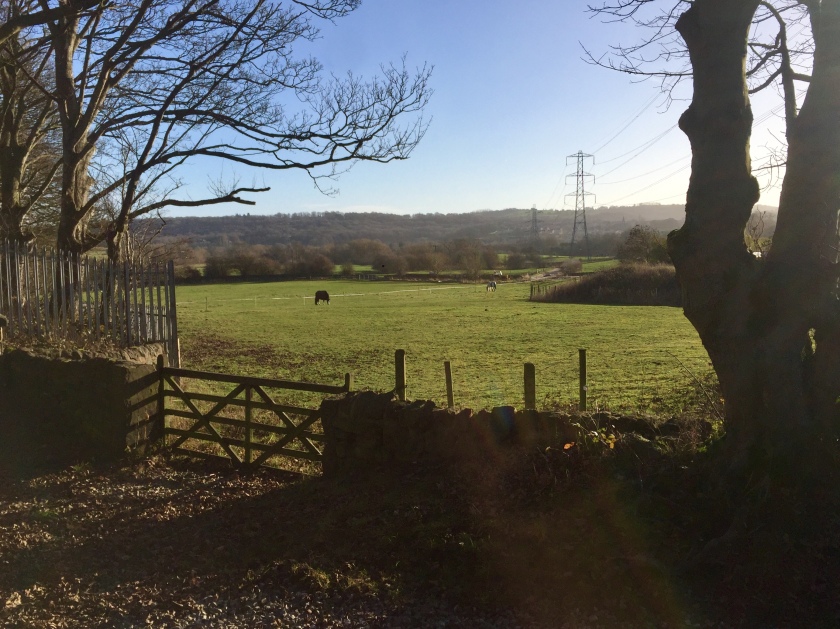 I would of liked to walk further, but then you have to walk back. So we turned tail and sauntered back whence we came. The wind was in our backs and the sun shone. There were all sorts of people out – mums with prams, elderly couples holding hands, friends chatting – we all smiled and said hello to each other. The Dog galloped after ducks in the water and woofed at them. A canoeist paddled slowly up towards Apperley Bridge – what a lovely way to travel, under your own steam. The railwaymen had repaired the track and disappeared together with their annoying beeping alarm. It was a glorious day. 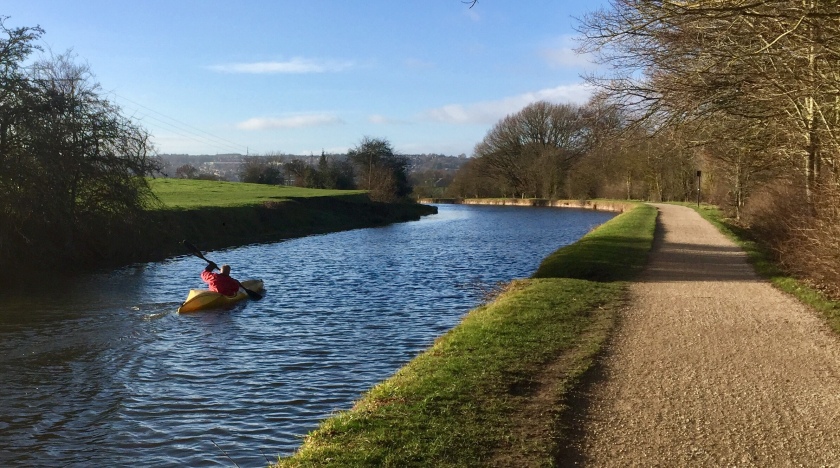 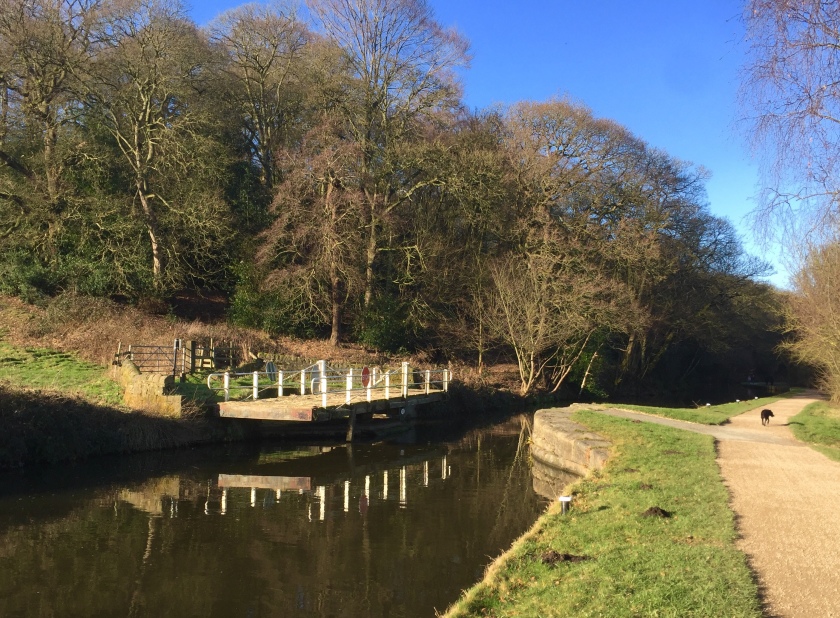 We sauntered back towards Rodley, passing the swing bridge which allows the local farmer get his cows from one side of the canal to the other for milking, before the houses began again and we neared the car. I hoped, with the sun out and plenty of people, the little stone shed cafe might have opened, but alas its picnic tables were empty and the door firmly shut. I looked at The Dog – she looked tired. It was past lunchtime and we had walked probably at least four miles if not more. I wanted a sandwich and a cup of tea, so pleased with ourselves we headed off home! 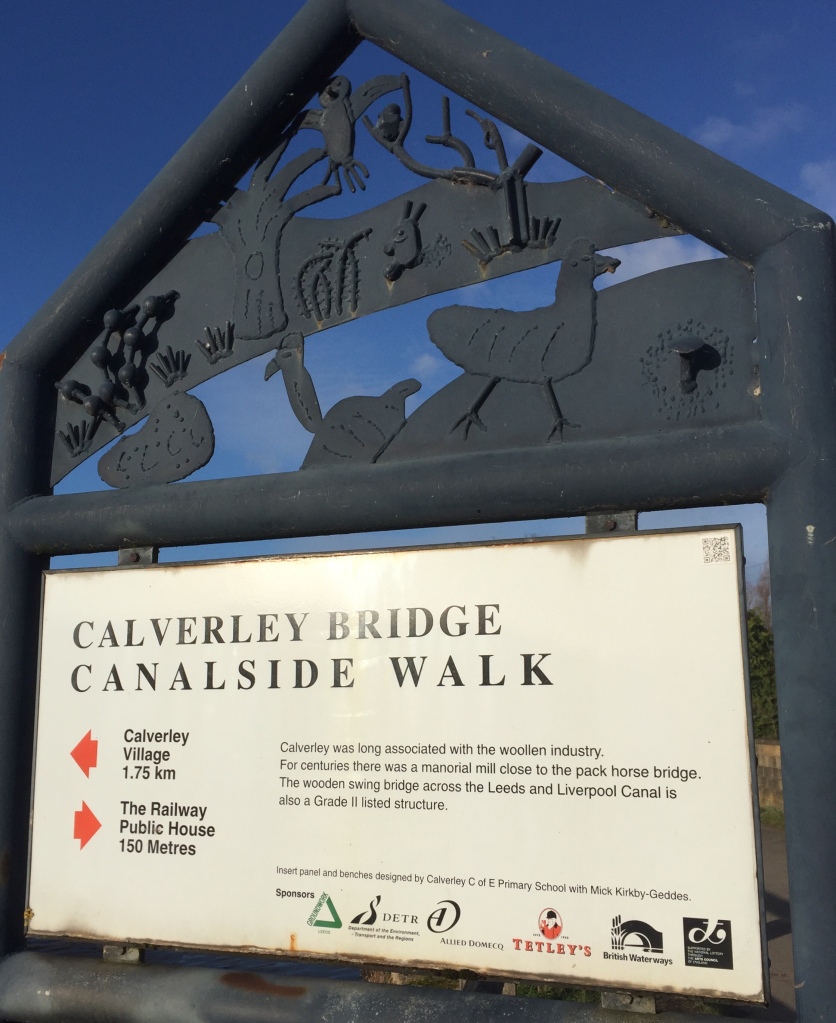