We were doing good. The last two days had averaged 10 miles a day. My blisters were a little bothersome but apart from that, we were feeling great. We had another 10 miler today, from Newtown to Carlisle.

We waddled down to breakfast. The hostess was there with a young girl, but it was a “help yourself” affair. Little dishes with a muesli compote, freshly baked bread, crumpets, just a great choice – it was a little different from the bog standard breakfasts we had eaten. It was one of the best.

Our luggage courier was early and it was the first time we had met the mystery man who transferred our bags every day. It was nice to thank him personally. Our taxi appeared shortly after and took us back to Newtown. The clouds were gathering again in the distance and it was quite a cool wind. The t-shirts and shorts had been replaced by jumpers and long trousers. We set off through the village and walked across flat fields, farms and footpaths. The Wall was represented by grassy mounds in this part of the walk. It was nothing on the scale of the middle part and we wouldn’t be seeing the stone wall again. ☹️

The landscape was relatively flat, heading towards the coast. There was nothing to note. The rain showers scudded past us and the sun shone in between. We passed by Carlisle Airport and watched as a couple of planes took off. It was noisy and reminded us we were heading back into modern life. We strolled along the river Eden, along paths and roads. It was varied. We came across another Snack Shed. It tempted us with an ice cream, but it was a cruel deception. The main Wall Walk season is encouraged between April to end of October to conserve the path and prevent erosion over winter (you are reminded to walk side by side, rather than in single file to preserve it), so these Sheds weren’t being stocked for the few stragglers like us.

We heard the roar of the M6 motorway a long while before we crossed it. A village sat right next door to it and the noise was awful. We followed the road into Carlisle and then onto a cycle path. It was here where the clouds finally got us and emptied their contents on us. We didn’t have time to get our waterproof trousers out (and we were close to the end of the walk) so our legs got soaked. Yuk. 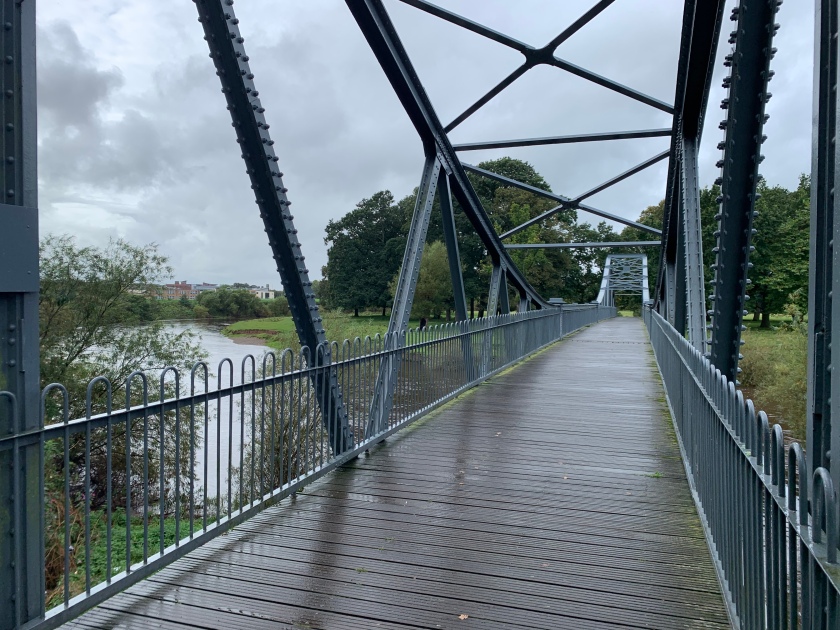 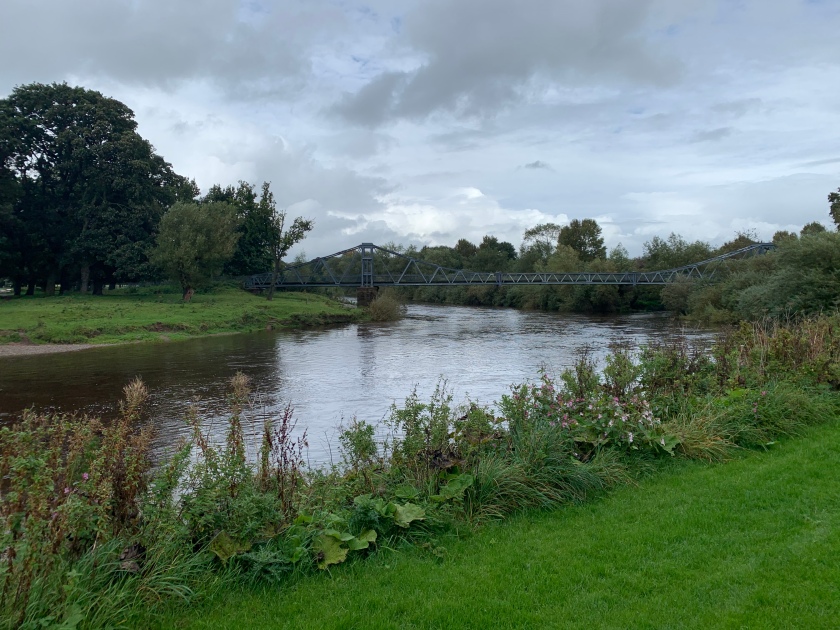 We were close to the river and as the rain eased off, we entered a large and handsome parkland. We walked across it, noting that there was some very large and fresh cow pats, but no cattle. It was a bit worrying – were they hiding behind the trees, lying in wait for us? We crossed the river by a sturdy iron bridge and studied the map. Our accommodation was just over there, but the Path followed the river round for another half a mile or more. We didn’t want to cut out a chunk, so we walked around the loop so we didn’t have to do it in the morning. It was a bit of a waste of time, following a riverside path with no views in the city centre, but it had to be done. We stopped at the Sands Leisure Centre for the loo before heading into the centre, looking for a cafe.

Carlisle is a strange place to try to love. We had just walked through a splendid park with a tall stone memorial and handsome trees, but now we were negotiating one of those awful pedestrian underpasses under a roundabout and were burped out next door to a seven storey high 1960’s building, a box of spectacular blandness. I wished I had packed some dynamite. Next door, was another equally ugly building resided by the government body, Defra. They were both massively out of synch with the town, a ghastly blot on the landscape. Further up was the 1980’s red brick building, home to the department store, Debenhams, which wasn’t much more of an improvement. Poor old Carlisle. What a introduction. What had the City Fathers been thinking to blight their town with such monstrosities?

The High Street didn’t help our mood either. It was like any other British High Street dominated by big chains like WHSmith, Marks and Spencer’s, Primark and the other usual suspects. It was repetitive and monotonous. I felt sorry for Carlisle. I wished I had more time to find the heart and character of this city and look beyond the corporate desolation of its centre.

We spotted a Costa Coffee outlet. They are everywhere these places, but we knew you could, at least, get a decent cup of coffee there. We weren’t that desperate yet, but noted it’s location as a possible last resort. Then on a street corner, a little wooden A board was pointing down a side road and was promising an independent coffee shop! 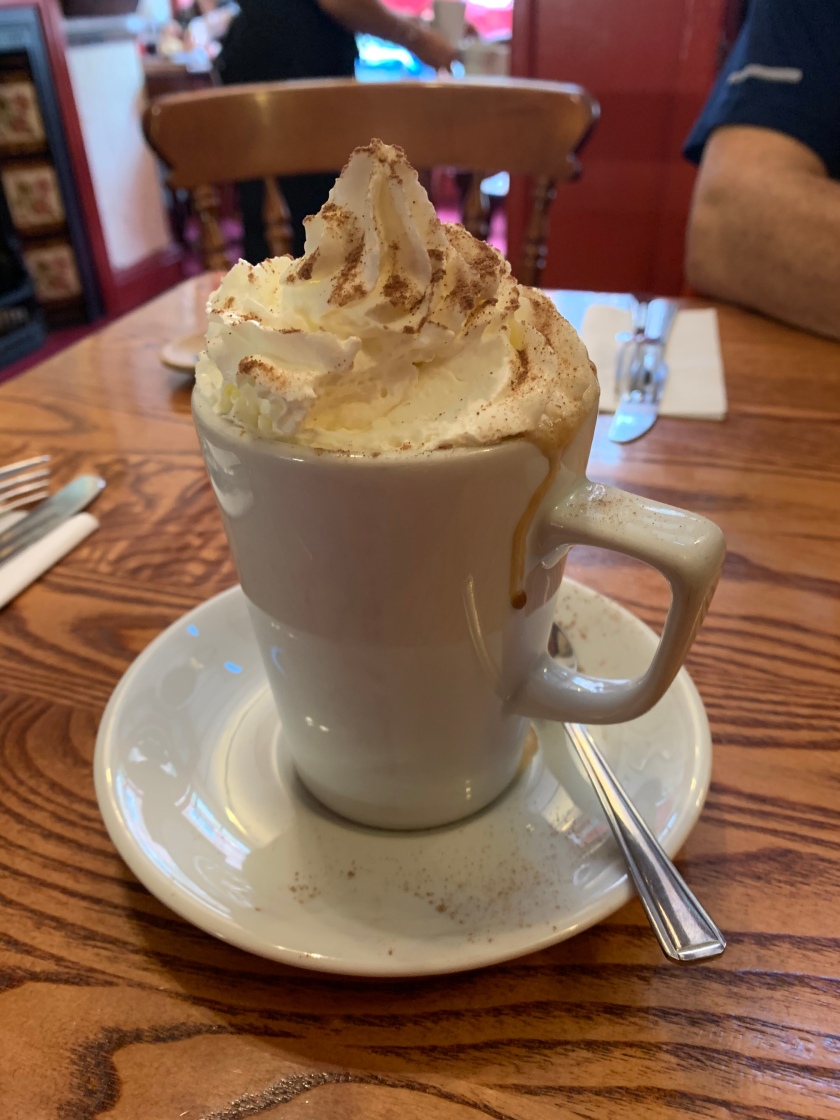 Oh and what a find. What a little gem. The coffee shop was a tea and coffee purveyor, with tea caddies lined on shelves and the smell of delicious freshly ground coffee. It was old fashioned, but small, cosy and warm. We sat down and ordered a meal. It was huge. Hubby’s sandwiches were like doorsteps, the bread inches thick. There were many different blends of coffee. It was very popular too and had a great atmosphere. It was a little oasis. We ordered banana bread for pudding and that came up as two slabs, the size of a stone from Hadrian’s Wall. We wanted to stay for the rest of the afternoon, but made a decision to come back on our last day.

Suitably refreshed, we walked out of the centre towards our guesthouse – down a busy, but attractive road of Victorian terrace houses. There were road upon road of them, with pretty windows, fancy porches and some of them, built in two tone brick. They were elegant and I really liked them. I was also starting to forgive Carlisle. And in amongst these rows of sturdy, proud houses was our guesthouse, The Howard Lodge.

It was slightly faded, stuck in a time warp of swirling patterned carpets into which you could lose things if you dropped anything. I liked it. It made a change from the modern standard. It was clean, tidy, airy, light and had everything we needed. We had a large room with high Victorian ceilings with a double bed and two singles, which made it a little cramped, but we at least could leave our suitcases open. We chilled and watched the sky get dark and rain showers whip by.

After chilling, we looked for somewhere to eat. Just down the road, we found a Greek restaurant called Alessandro’s and enjoyed a fabulous meal. It went straight to the top of our restaurant meal rankings. It was beautifully cooked, tasted amazing and was just perfect. The staff were excellent too. We were very happy.

We had a wander afterwards to walk off our meal before bed and experienced a brief, but eye brow raising glimpse of Carlisle’s nightlife. By the restaurant, it was genial and sleepy, but just down the road, it was rowdy, noisy, and grubby. What a contrast. We didn’t linger and headed back into the quiet backstreets. We headed back to our room and settled down. Tomorrow was our last day of the walk, 15 miles from Carlisle to Bowness on Solway. The last week had whizzed by and we couldn’t believe it was coming to an end. I had mixed feelings – I was tiring of walking every day, but wanted to carry on at the same time. I was sad, but felt ready to go home, fed up living out of a suitcase. And anyway, we were running out of clean underwear…………….