Yep, the wellies have finally made an appearance. It’s that time of year and I have resisted, believe me. But one too many walks in walking trainers ending up with soggy feet has made me reluctantly dig them out.

The Dog and I headed off to Ingleton to walk around the countryside there. It wasn’t going to be a particularly long walk, but got us out into the fresh air.

We parked just outside the village centre, on the road. I donned the wellies and we trotted off towards the main A65 road which runs from Leeds to the M6. It catches the western edge of Ingleton and is lined with light industrial units and housing. It’s a busy road, taking people to the Lake District. I’ve never found this stretch of the road very inspiring and feel for Ingleton. It just doesn’t look nice and inviting.

With an OS map, I tried to work out where the path was. There were no finger posts so I took a gamble as I led The Dog over the A65. It turned out to be the track I wanted, past a small static caravan site and out into fields. We followed the track, passing fields with small sheds made of metal and the odd large caravan. It was a bit unsettling. We came to a house, and the track turned into a grassy path. Since we got onto the path proper, it’s been clearly marked with little footpath badges nailed to gate posts. Makes life easier. 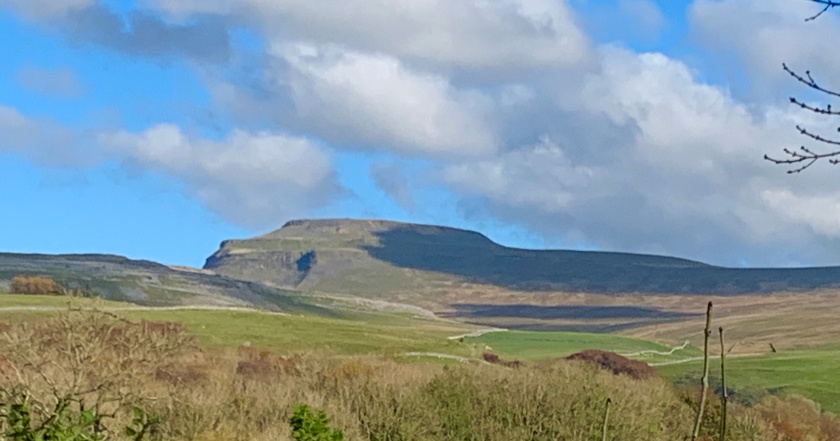 The surrounding land was just rolling farmland, but it offered great views of Ingleborough, majestically watching over the town. We wandered through squelchy grass, having to duck under an enormous branch that had sheared off a nearby tree and blocked the path. We looked out for our left turn and wandered into a sheep field. The Dog was on her extendable lead and headed off to the right as she had heard water. There was a ditch covered in long grass which she didn’t realise wasn’t solid. She stood on it and sunk up to her chest in it. She looked a bit shocked as she tried to figure out what had happened. She’s a water lover, but doesn’t like being surprised. She stalked out unimpressed, shook and trotted off as if she meant to do that all the time. 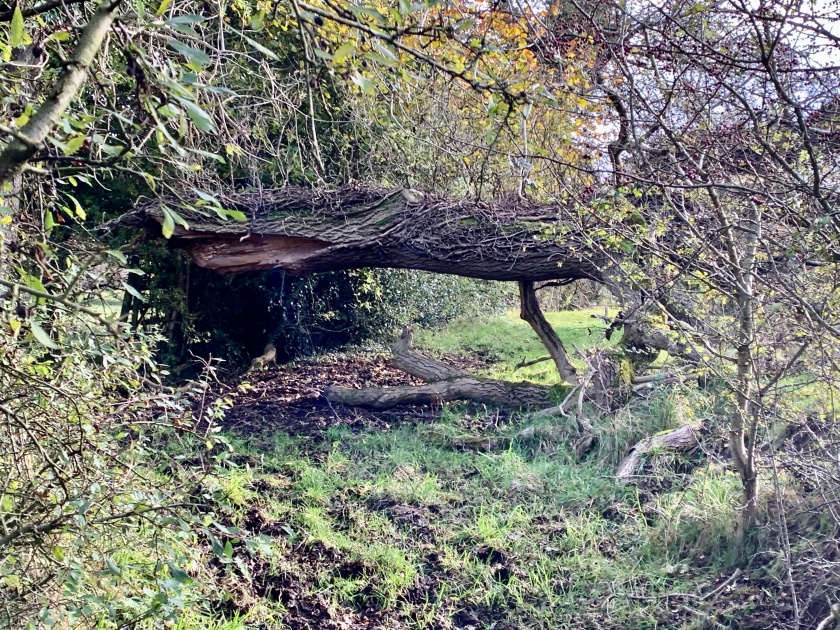 We hadn’t gone far when we came up to a stone stile. The Dog leapt up to go through and got briefly wedged between the stones. Just not her day. Her shoulders and chest area got stuck and she had to wiggle through. I laughed as it was comical. Payback after all those times I’ve got wedged in stiles and she’s watched in some kind of awed embarrassment. 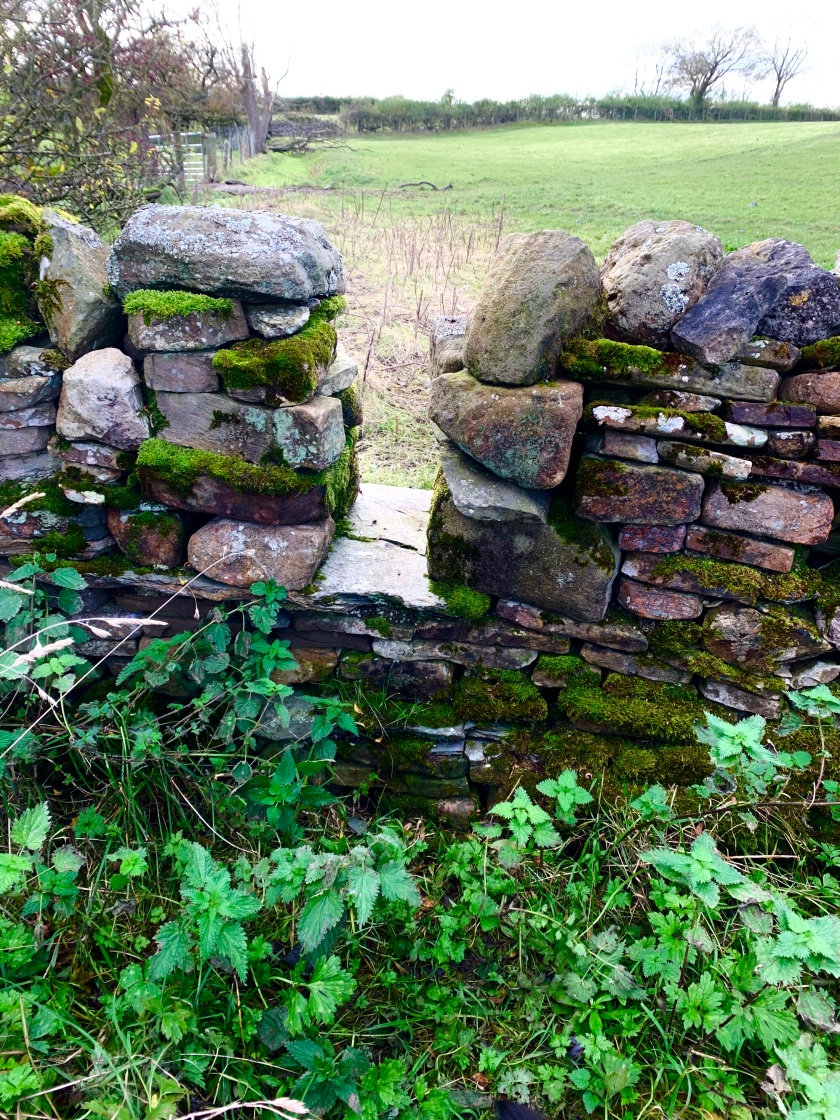 We crossed another field towards a cluster of buildings. It was one of those farms that had heaps of junk everywhere and many different vehicles parked haphazardly, few of them looking like they haven’t moved for years. These places are always deathly quiet and a touch creepy. They always feature in TV series involving murder and intrigue. We didn’t linger. We studied our map and bore right into another field, but despite the path clearly defined on the map, I just couldn’t find it on the ground. There was no signs or stiles, only twine tethered gates which don’t give you much encouragement to go through. After a couple of minutes of discussing it aloud with The Dog, who was more preoccupied with having a good sniff of something disgusting, I decided to take the easier option of following the track and cutting through another field further up.

It was a good call. It was easy to find, and you could see other people’s footprints which is comforting. We were burped out straight back on the A65 with juggernauts and other large vehicles whistling past us, making my hair dance. Luckily there was a pavement opposite and we walked a couple of hundred yards to the next fingerpost pointing towards Ingleton across the fields.

We strolled across a field, skirted a little woodland and then across a scrubby field towards a modern housing estate, back into Ingleton.

Ingleton is a funny place. I feel quite sorry for it. It’s got a sweet little centre, with a church perched up high, the disused railway viaduct striding prominently across the river and little independent shops selling mainly tourist gifts. But on its periphery, it’s dominated by pebble dashed or faux Yorkshire stoned square, featureless housing, spread haphazardly, with large swathes of open land, ideal for filling in with more housing. It looks like it’s been dropped from a height and splodged. It just seems messy and incoherent, but saying that, Ingleton seems to attract visitors. Ingleton Waterfalls is a big attraction in the area as well as White Scar Caves and the start of several walks up Ingleborough just outside the town – I haven’t visited these places for years, so check out the links below. Ingleton is also a popular base for cavers and potholers – it has a couple of great outdoor shops. There are several caves including Gaping Gill, where on certain days of the year, the cavers will lower members of the public down on a bosun’s chair, into the cavernous depths of Gaping Gill. That’s one on my bucket list to do.

As I say, the village centre is very pleasant and just outside the village centre, you can find Ingleton’s popular outdoor heated swimming pool by the river which opens during the summer months. The Dog and I wandered past it now, but it was shut. I was a bit alarmed to see the pool uncovered, full of water, the tiles green and slimy. It looked like it hadn’t been used for ages. There was a board by the gate informing the public that there were plans to extend it. Perhaps work had already started and they hadn’t bothered with the main pool. It looked very neglected. Let’s hope the work is done quickly and the pool gets back to its usual vibrant self. It’s a little treasure.

We strolled back into the Main Street. I was going to take photos, but the Co-op’s ugly frontage and a tacky Indian sign put me off. There really should be a law that stops businesses putting up gaudy, bright and totally out of synch with their environment signs on their shops. There’s nothing more disheartening that pretty little row of shops, then a big company putting its national corporate badge slap bang in the middle, regardless of its surroundings. Tone it down, it’s not difficult. And while I’m on this brief rant, people should also be banned putting cheap modern white plastic doors on little cute cottages. One of my bugbears.

Another one of Ingleton’s little treasures is its 1940’s weekend in July where the village becomes overrun by all things WW2. There’s soldiers, ARP wardens, Americans GI’s, Home Guard and Land Girls wandering around – old jeeps, motorcycles and cars arrive. There are stalls, music and dancing in the square. It’s all great fun. Sadly in this day and age of overwhelming PC, the Germans are apparently not welcome anymore, so nobody’s allowed to dress up as a German commandant, Gestapo or SS which is rather sad in a weird way. They were part of the story, so shouldn’t be erased out, however uncomfortable it is, which is odd as if we were going to be uncomfortable, it would of been years ago, not in 2019. Anyway, it’s touched somebody’s sensitive nerve and Germans no longer strut through Ingleton in July.

The Dog and I sauntered around, noting the butchers had gone and there was no bakery, though I then remembered that there is Seasons Bakery on the outskirts which is a oasis of bakery products. It’s one of those places so full of pastry delights, you spend ages cooing and choosing. Many a time I’ve gone in there for a loaf and come out with an armful of cakes, buns and tarts. Very yummy. We dropped down to wander under the viaduct, a magnificent piece of Victorian architecture and past Ingleton Pottery, full of ceramics at very reasonable prices. It’s tucked away, so how it gets visitors I don’t know, but they do sell their wares in other shops.

We had just about exhausted Ingleton, and with nowhere else to check out, we wandered back to the car. Another glorious, though chilly day, the sun shining through the clouds. The trees were now showing their full autumn glory – it seems someone has flicked a switch and they’ve all turned from green to gold, orange and red overnight! It made a very pleasant drive home.