For many months now, I’ve driven through the little village of Claughton in Lancashire and watched the aerial ropeway transport little yellow buckets of clay down from the wooded fellside, over the main road and into the brick factory opposite. It was intriguing and I wanted to find out where the quarry was. It was up there somewhere, hidden in the trees. 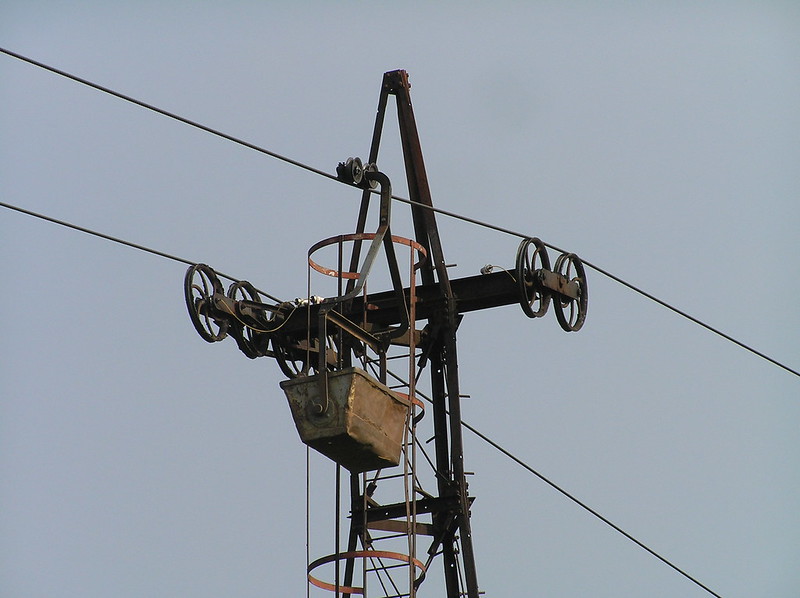 So recently, with the winter wind and rain finally giving us a window of longed for sunshine, The Dog and I headed to Claughton, armed with a map. The car said it was 4 degrees outside, but it was glorious. It’s not easy to park in Claughton, but we parked in the car park of the little ramshackle building which I presumed was the village hall. There were other cars parked but the hall seemed closed and shut up. No signs said I couldn’t park, so I got The Dog on her leash and we set off.

We walked towards the Fenwick Arms pub, where opposite there was a little tarmacked lane. We strolled up between houses and hedges, dodging puddles. A little way along, the road forked and after a quick check, we took the right hand one. It was a steady pull up, the wood on our right, sheltering us from the stiff breeze and on our left, opening out to fields. I kept my head down and plodded up. The woods seemed to be enclosed by high deer proof fencing, but gates were open. Between the trees, a large house could be glimpsed at. It seemed very isolated, the sort of place that would be a location managers dream for a thriller. It looked like a large Manor House or Hall surrounded by those tall trees that creak and groan. We passed some double gates and a large sign that said private. I could just see the top of the house. It looked very intriguing.

We carried on. The road bent right and dismayingly dropped down, before swerving left and clambering up again. The sun was out and out of the wind, I was starting to shed layers. The lane had now become a rough track. It must of been an ancient track as underneath the decaying top layer, there was cobbles and another surface of small stone flags. It was obviously cheaper just to chuck some cheap asphalt on top than retain the flags underneath.

Finally, we could see the brickwork’s ropeway. Stubby rusting pylons stood at regular intervals, the steel rope hung between and a bright yellow bucket sitting silently in mid air. The brick factory obviously wasn’t open today, so the ropeway was stationary which was a shame not to see it working. It was kind of spooky. The silence and the stark ironwork of the pylons imposing on the scrubby landscape. At the entrance of the quarry, there were the usual abundance of health and safety notices, so The Dog and I scrambled up a nearby mound to see if we could see into the quarry properly. But to no avail. You could see part of it. I read later that it had got an extension to continue quarrying til 2036 as there was another 1.2 million tonnes of material to excavate or 50 million bricks a year! Mind blowing figures.

The path carried on upwards towards the wind farm on the summit. We turned at a hairpin and was startled to find an isolated farmhouse up there as well, braving the elements. We trudge up. The road had suffered damage, so the solution to the massive potholes and deep ruts was to fill them with red bricks from the works. I smiled to myself – how many times I had stumbled across woodland with hints of Victorian industry poking through – the odd gate post, a pile of stones, a foundation and here was history in the making. In a 100 years time, when the brickworks would be gone, people would find these red bricks and wonder what was here. Now they were fresh and bright and recently laid.

We walked up to the farmhouse and met a man mending a dry stone wall. The view up here was outstanding. A complete 180 degrees from a snow capped Ingleborough, along the Lune Valley towards Morecambe. You could see Heysham Power Station, Grange Over Sands in the south Lakes and Barrow on the edge, far out in the Irish Sea. You could see for miles, though it was quite hazy. The man told me that you could see the Isle of Man and Ireland on clear days. I decided to come up here again, armed with some binoculars when it promised to be clear. It would be fantastic. I chatted with the old boy for ages, until I realised the wind was cutting and very cold. It was piercing my waterproof and three layers underneath. I took my leave and wandered further up towards a gate, trying to get some body warmth back. It kind of opened up here. The track turned back into a proper road and dropped down towards the village of Brookhouse. I was tempted to make a circular route out of the walk, but hadn’t taken any photos for the blog as well as not being prepared for such a walk. I checked the area out. There was a information board about the wind farm, picnic tables and a stone compass. I discovered that local children from a primary school had named the turbines. How sweet.There was a track going up behind the turbines and I wanted to get really close to one. I wandered up a little way, but the wind was relentless and I was losing the feeling in my fingers. This needed more investigation. I wasn’t sure if The Dog was allowed up this track as it was on the edge of access land where dogs aren’t allowed. I took a couple of photos and decided to head back. I would return with binoculars and a packed lunch on a hot summers day, to sit up here and admire the stunning scenery munching egg sandwiches and drinking hot tea. Perfect.

The Dog looked relieved as we retraced our steps, stopping to talk to the dry stone waller again. I could of talked with him all day as he was a mine of information, telling me stories of 50 years ago. Really fascinating. But the wind had no mercy, howling down the track, nothing stopping it until it hit me. We continued, thankfully all downhill. Past the quarry and the silent ropeway, the tall trees swaying in the wind. On the way down, I could see the Lune Valley properly, where the River Lune had broken its banks and flooded the surrounding fields. It is a flood plain and it had obviously done its job. The old boy had told me that it had looked like a one huge lake stretching the length of the valley. I wished I had seen it.

As we reached the lower end of the lane, the sun disappeared abruptly behind black clouds and it started to rain/hail. We quickened our pace and reached the car just as the hail intensified and pelted the roof with an alarming noise. Wow. It really meant it. We couldn’t of timed it better and glad I wasn’t up by that farmhouse. We had our tantalising dose of spring after weeks of heavy rain and ludicrously high winds – it has seemed endless. We drove home for lunch as rain showers seemed to approach us at all angles, like a pincer movement. I was happy. I had found another walk to do.