A slightly different angle to my adventures.

Today I’m travelling by train on the Leeds Morecambe line, a journey I’ve done many times and always enjoy. I love train journeys watching the world whizz by and the ever changing scenery.

I had to catch a train into Leeds and was pleased to note that Northern Rail who run this line have upgraded its trains. Usually a dilapidated diesel rumbles in, but today a reasonably brand new one eased into the station. Bright, clean, well lit and carpeted which was a bonus, it was a very good start.

I changed trains in Leeds, grabbing a coffee as I waited on the chilly platform. I studied Leeds jagged skyline, new office buildings jostling for prominence, while older, more stately buildings and churches peeked in between. Trains pulled in as I admired how the whole rail system works, the myriad of tracks, overhead wires and gantries. It has its own kind of weird metallic beauty.

The train waiting for me was sadly a two carriage sprinter of indiscernible age, designed from bus/coach frames. I realised where the old stock went – on this line. They were evidently second hand stock, but in reality had probably been passed through many southern train companies before arriving in the North (we get all their casts off). They must of been at least 40 years old and it showed.

The driver appeared and started it up, diesel fumes spewing from an exhaust. He let it run for 10 minutes, probably trying to warm the damn thing up. Finally the doors opened and I sat on a hard seat, it’s material cover fraying. It was like sitting in a long tin box with windows.

The train crawled out down the Aire valley, the warehouses and industry giving way to winter trees and cold landscape. We’re still deep in Leeds suburbs but it’s almost countryside. I just love that this part hasn’t been developed. Finally the valley opens further and there’s long distance views of suburbs, villages and country.

We whizz past stations, it’s a cold, misty, overcast day. People wrapped in thick coats, scarves and hats, huddled waiting for their trains. We stop at Shipley and Keighley and other stations, in between filled with the housing estates, low level industry and warehouses, supermarkets, chimneys and factories interspersed with fields with grazing sheep. It’s a disorganised messy mish mash as the 21st century life encroaches on years of farming and agriculture. Gradually it all reverses with more and more fields and the occasional pocket of industrial units and housing. Past Steeton and Silsden, the valley broadens our further as we head towards Skipton. Today the long distance views are subdued by the mist and general dullness of the day. Fields are flooded from recent heavy rain where rivers and streams have burst their banks.

We slide into Skipton, past rows and rows of terrace housing. The sun tries to push through the gloom. I like Skipton station as it still maintains its Victorian heritage with a glass canopy over its platform, ornate iron girders holding it all up, painted in red and cream. All stations should be like this – just timeless.

Now we’re out in proper countryside, all rolling hills, farms and pretty villages. The train has developed an inexplicable draught so now I have one very chilly leg. I’ll be glad to get off this wretched train. Not the best. 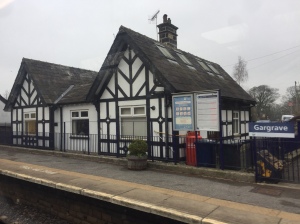 A few months ago, a friend of mine brought to my attention an unusual fact about the Leeds Morecambe line, which ever since I’ve wanted to thump him for it. The line splits at Settle and up to that point, it’s a smooth, quiet ride. Then we apparently change over onto older tracks which clackety clack and judder for the rest of the journey. Had never noticed it before, but now it just bugs me!

The sun has bullied its way out and a weak watery sunshine lightens the misty fells. The countryside just gets better as we travel on the edge of the Yorkshire Dales. It’s been a lovely train journey despite the different temperatures flowing around my legs for most of the journey and I get off feeling very content with the world. Beats travelling by car any day.