After a week of Christmas overindulgence and slothness, The Dog and I were desperate for a very long walk and space. So we headed to Arnside Knott.

We’ve been to Arnside before, sitting at the mouth of the River Kent, usually wandering the shoreline, but today we incorporated The Knott, a nearby hillside with stunning views of the Cumbrian countryside and beyond.

The morning started with a thick frost covering everything and a thin watery cloud. We headed off mid morning, driving cross country. Down one particular road, we passed a sign attached to a telephone pole which said “Think Horses!” It was a warning sign for fellow road users, but the way it was written made me think, “Yep, I’m thinking horses – a tall four legged animal of many colours, but mainly brown and we ride them…………”

We rolled into Arnside and parked in our usual spot, overlooking the estuary. It was quite busy despite today being the first day back to work for many workers after the Christmas break, but the kids weren’t back to school yet so probably there were still lots of people enjoying another week off. The Dog bounded onto the beach in sheer delight – she had had too many short walks and on leash lately while her humans had been too busy celebrating, suffering from the after effects and from illness and now she was free! I caught up with her, noting how still the water was – it was like a millpond. It was beautiful. We wandered along the shore, walking towards Morecambe Bay. There were quite a few people out, doing the same as us – getting some air. Fishermen sat fishing on the waters edge despite the biting cold, waiting for the fish to bite. 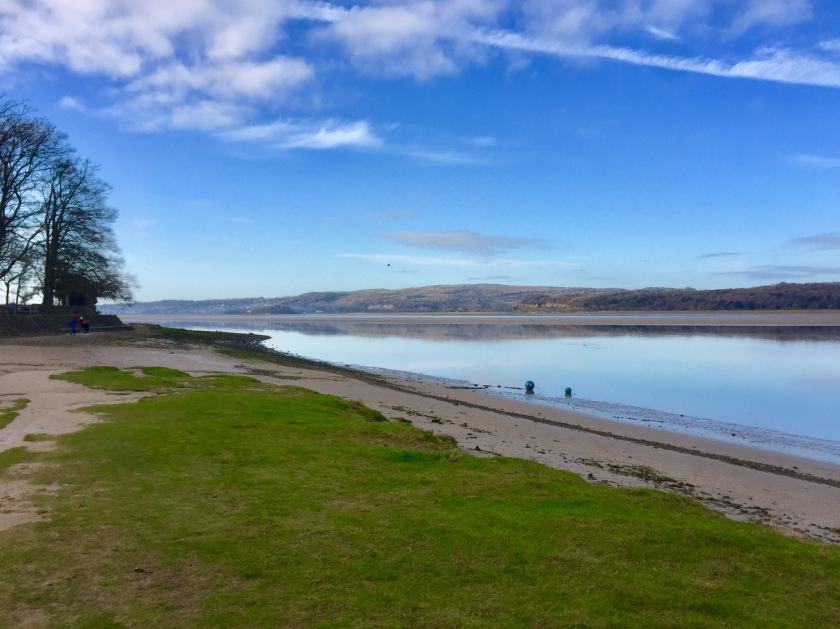 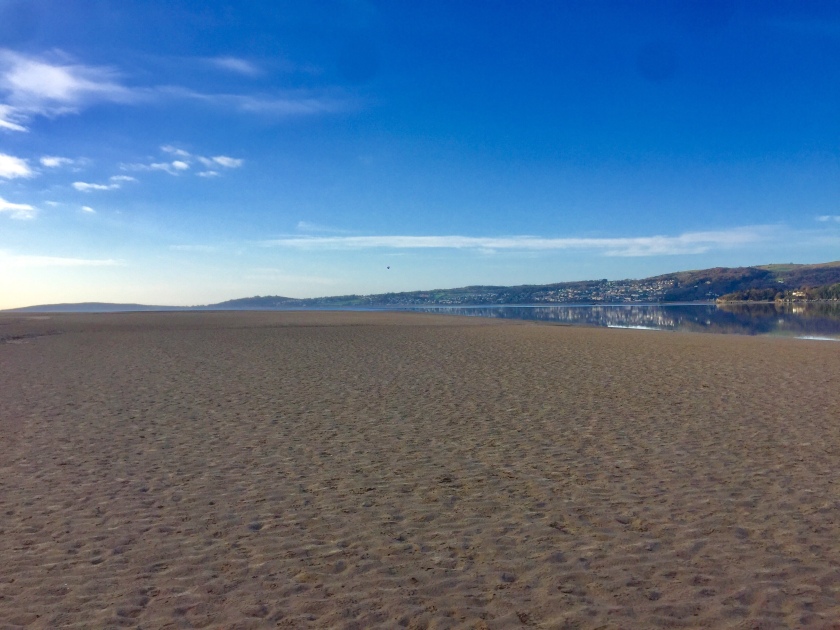 We followed the estuary towards the sea and wandered around the headland into Morecambe Bay itself. The cloud had broken up and there was blue sky above us. It was very chilly, but the colours were stunning. We came off the beach here and entered a campsite perched on the edge, but hidden from view. This is a really quirky static caravan site. Most British static caravan sites are very regimented with the metal homes set in lines in a field, with a little verandah, a space alongside to park a car and lots of rules, like no ball games, keep dogs on leads, no noise after 10pm, etc. It’s all very manicured and controlled. This one is totally higgily piggily – set in a wood, the vans sat at different angles, squeezed between the trees on the hillside, all at different heights. They also had their own little plot of land around their caravan which they could do what they like with, so there was a mixture of fencing and bushes surrounding lawns and gardens. It was like home from home. It felt all rather strange walking through it but I quite liked the individuality of it all. It felt very relaxed and the only rule I came across was “please pick up after your dog” tacked onto a tree trunk which was probably aimed at passing interlopers like me. I could stay here.

We walked to the entrance of the caravan park where, to our delight, we found the cafe open. I called in and bought a slice of courgette and avocado cake. Don’t ask me why I bought it when there were flapjacks, Bakewell tarts and scones beckoning me, but it being New Year, I thought I would try and be a little bit good and have at least two of the “Five A Day” fruit and vegetables recommended by the health authorities. I took it outside where The Dog was waiting – she took a great deal of interest in my purchase. We kind of shared it. It was nice, it tasted alright though the cream inside was a bit much. It just didn’t get me hankering for another slice like a piece of flapjack would. But it filled a hole and would keep me going. We wiped/licked our faces and sauntered towards the Knott. 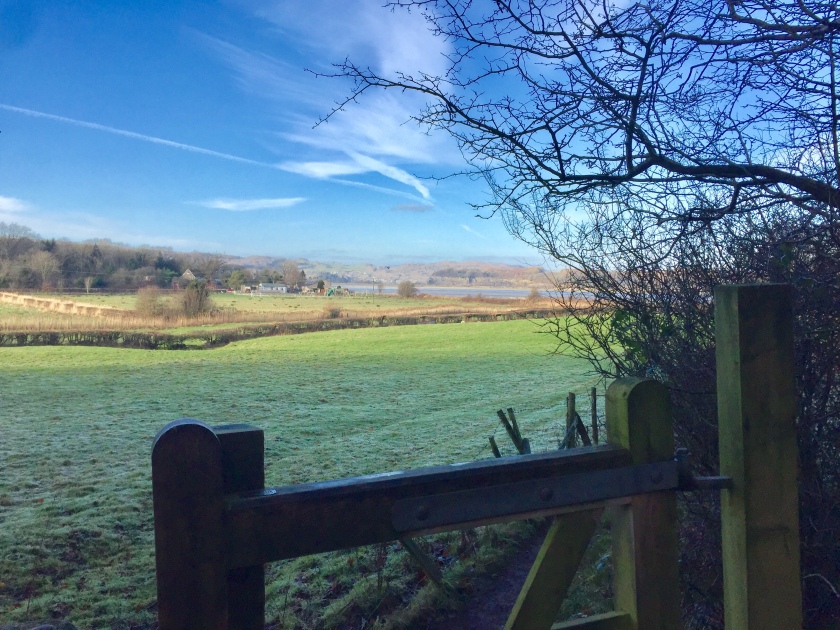 The Knott overlooks the little village of Arnside, a rising eminence of some 159 metres high and under the custodianship of the National Trust. From the cafe, we followed the concrete track to the road and on the S bend, took the footpath on the right hand side, crossing the field between two fences. The Dog did her usual stupid stiff legged gait and solitary bark, her way of pretending to round up the sheep in the adjacent field. This bunch were obviously used to so called big brave dogs, lifting their heads chewing slowly in bored interest before returning to nibble more grass. We came up to another gate, entered woodland and the dog concentrated her energy on chasing imaginary squirrels. The path wound upwards on a steady incline – there were numerous side paths too which looked interesting, but we heading to the top, so we kept to the rising path. Finally we came across a sign post and after some thought, we chose the left one marked Arnside. Some 100 yards later we came to another gate and realising that the path was just contouring, we bore immediately right, up a small path alongside the stone wall. The path turned into gravel and got steeper. The Dog found a thin path on her left and started to follow it. My dog has always walked ahead of us, despite many years of trying to get her to walk with us. She seems happy in her own little world, doing her own thing, away from us. She always has to be first to gates, stiles, doors, but she also has this uncanny knack of taking the right route. Today was no exception as she paused patiently until I came round to her way of thinking. Trustingly I followed her which turned into alarm. The path veered startling upwards which in its own right wasn’t too bad, but it was made up of small shingly stones, the type that freely move as you tread on them. I hoped my trainers had good grip. I just didn’t want to be taking three steps up and skidding down four, getting hot, sweaty and swearing a lot in frustration. The Dog, with her in built four paw drive, leapt up the trail and then showing off, bounded back down, proving how cumbersome two legs can be. A family with two young children were coming down, gingerly, hoping they wouldn’t slip and bring someone down with them. It would be just an embarrassing, painful fall on the bum and the child then refusing to take another step unless dad put them on his shoulders, which you could see, would be the last resort.

My boots did their job and I plodded steadily upwards. It was a short climb of no more than 200 yards at most, but I stopped a couple of times to admire the emerging views above the tree cover. It was just stunning. 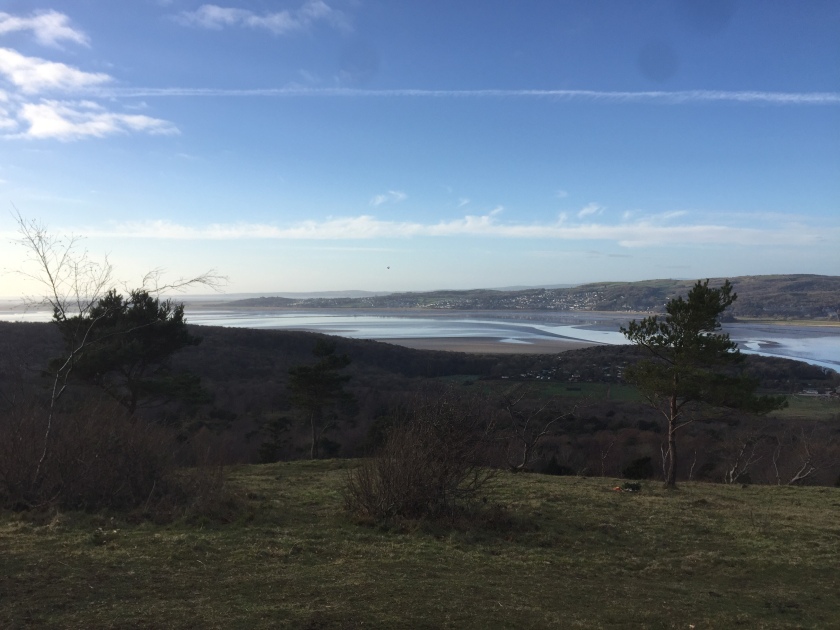 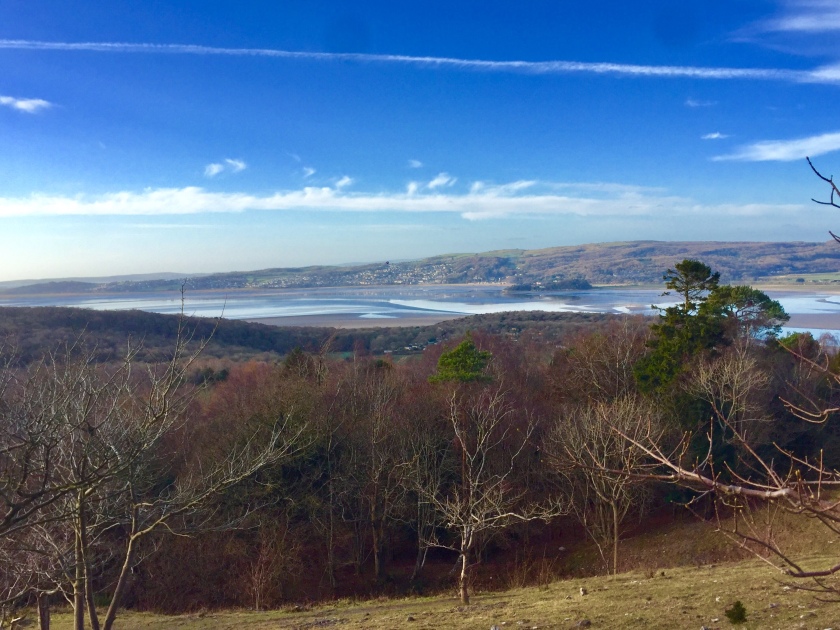 We reached the viewpoint which gave us a proper breather and to take in the spectacular views. A three sided wall had been built by some kindly organisations and inset with a metal plate, engraved with a silhouette of the landscape.. As it faced the Lake District, this was most of the peaks and fells and each one was marked with its name and height. It was fascinating to tie the two together to pinpoint their location – Old Man of Coniston, Helvellyn, the Langdales. Even Skiddaw, the Wainwright fell looming over the northern Lakes town of Keswick, some 40 miles north was marked and could be located with the naked eye. 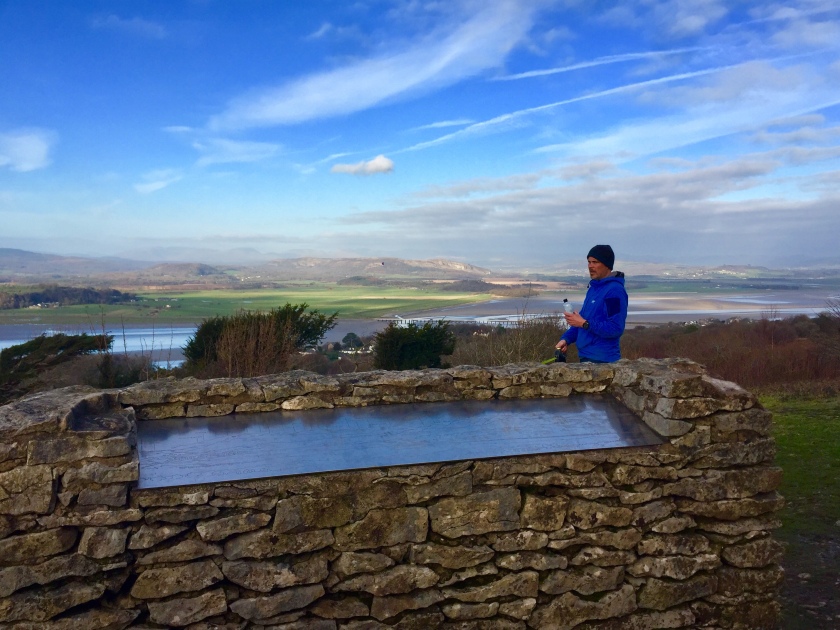 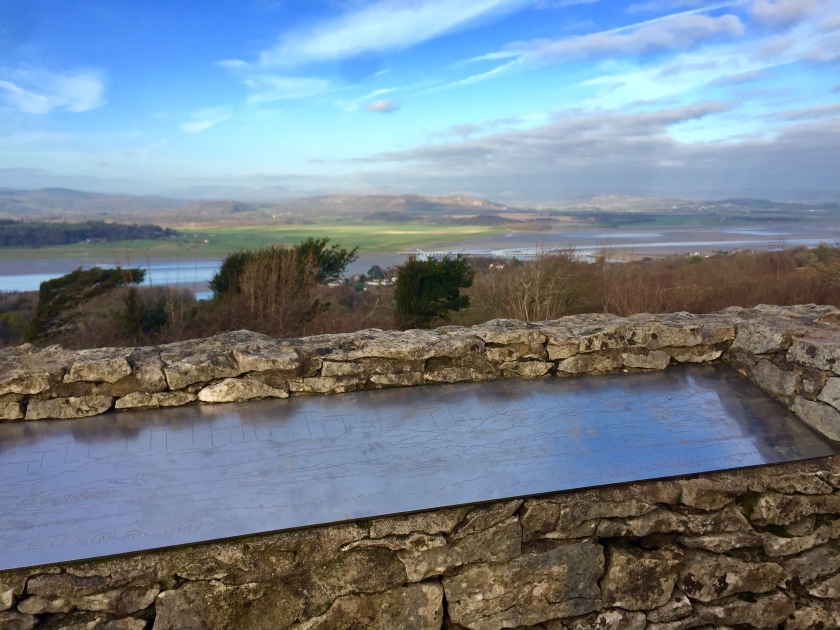 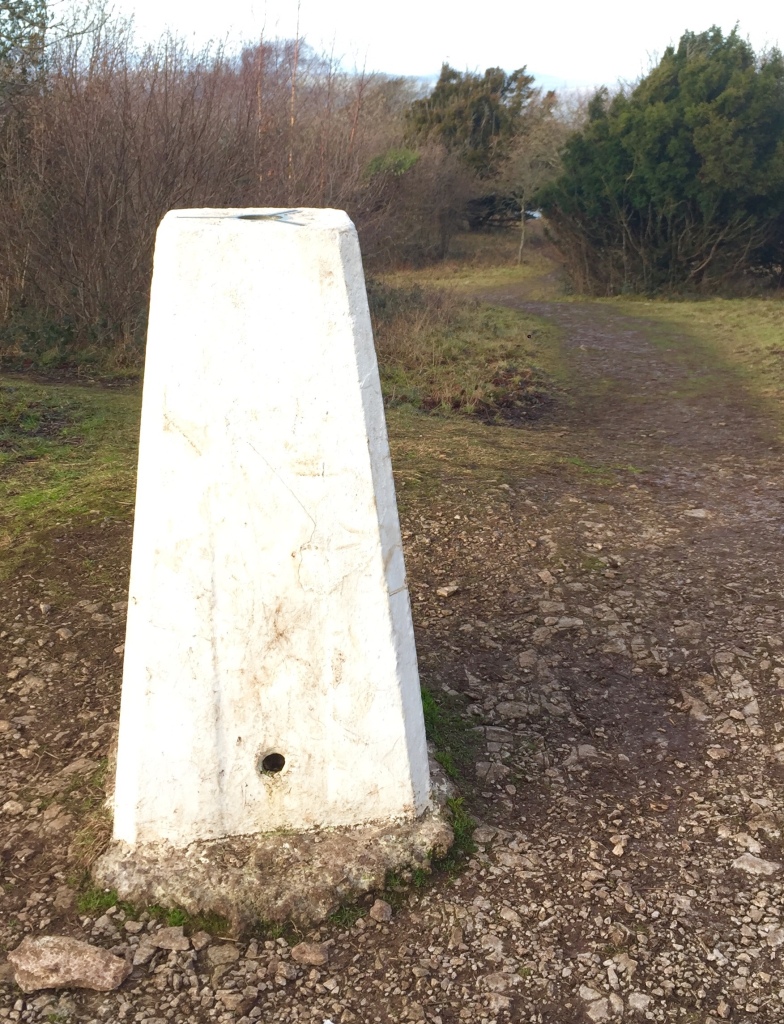 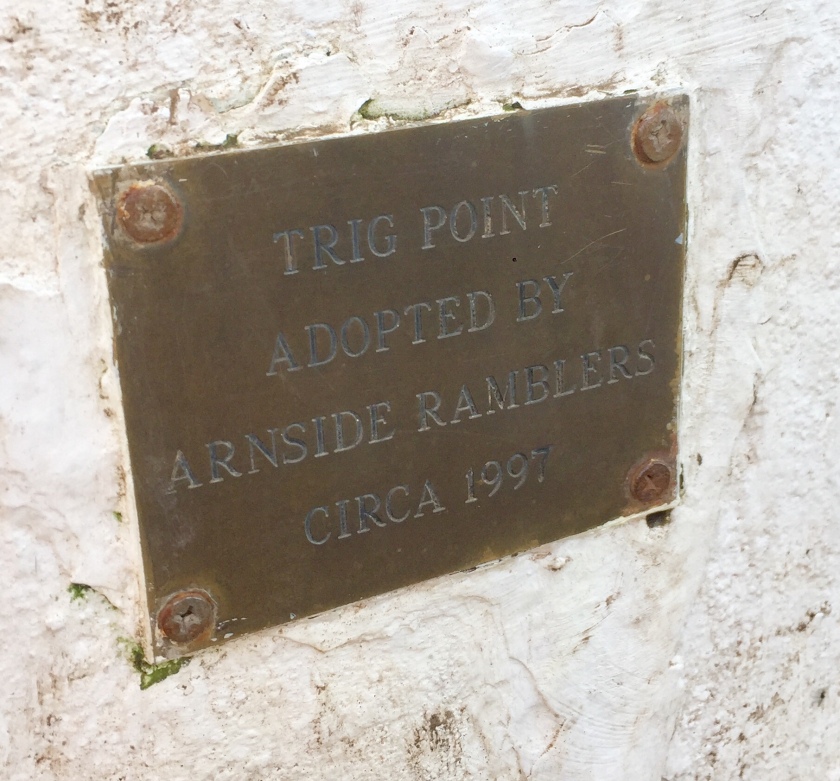 The Dog and I headed further up – a more leisurely slope towards the summit. The woods dropped away on one side, revealing the south side of the Knott with views across towards Silverdale, Morecambe, Heysham and on a good day, even Blackpool Tower. We came across the trig point, denoting the highest point of the Knott. We both touched it, because we could. There was no view here as the trees were too tall. Instead I read the little plaque on the side of the trig and was delighted to see that the Arnside Ramblers had taken it to their hearts and adopted it around 1997. It was a day of obscure and quirky signage. Usually benches and other public furniture is usually sponsored or donated by an organisation or group, but I had never seen one adopted before. It seemed that this particular trig had been left out from all the sponsoring and donating of its fellow trigs, so feeling sorry for it, it got adopted as if it was a cat or a dog, I thought it rather whimsical and so typical of the British. It also struck me that the Ramblers couldn’t remember exactly when they adopted it, citing sometime around 1997. If it was 1897, I could understand the records being a bit fuzzy, but 1997? It was only 21 years ago. I wanted to meet this group that went around adopting trigs but couldn’t remember when, but then I thought maybe the engraver had lost the little note with all the details on and embarrassed, decided to hedge his bets with “circa 1997”. Anyway I just loved the idea in every way and spent a few minutes deciding on what public item I could adopt.

After my musings and The Dog getting impatient with my blank staring (a quick sharp bark brought me out of my reverie) we started to descend. We followed the path which led to a wooden swing gate into a large wide field and plodded downwards to another woodland. We followed the woodland path until houses loomed through the trees and we popped out onto a private road with large prosperous houses, which allowed me to indulge in my favourite habit of staring into them. However they had such massive front gardens, I was rather thwarted, so I admired their gabled ends and fancy frontages instead which were rather splendid. We were obviously in the part of Arnside where the rich merchants lived when it was a busy and prosperous port, with their views across the estuary. We dropped down onto the main road, meandering our way back to the promenade. The Dog ran back onto the beach and paddled in the water, looking happy again. We just sauntered around the shoreline and the adjacent shops, taking in the glorious day, stopping to chat to fellow dog owners. It was just so pretty, the colours subtly changing as the afternoon wore on. We didn’t want to go home.

We had another little wander along the rivers edge before heading back to the car and retracing our steps. On our way back, I saw yet another sign that got me thinking. It was a name sign that most hamlets, villages, towns or any cluster of buildings have to introduce themselves to the passing traveller. Usually there’s an added note on the sign like “Carnforth welcomes careful drivers” or “Carnforth, please drive carefully. However, under this village name, the parish councillors had chosen “a thankful village” for their message to the world. I wondered what they had been thankful for – dinner? That it wasn’t raining? That me and my dog had passed thoughtfully through their village? You could give thanks for countless of things. I decided it would make a brilliant game for those endless, tedious car journeys to Aunt Mabel’s. “Skipton is thankful for………….Leicester is thankful for……….. Later, I thanked that little village as I played my newly invented car game all the way home! 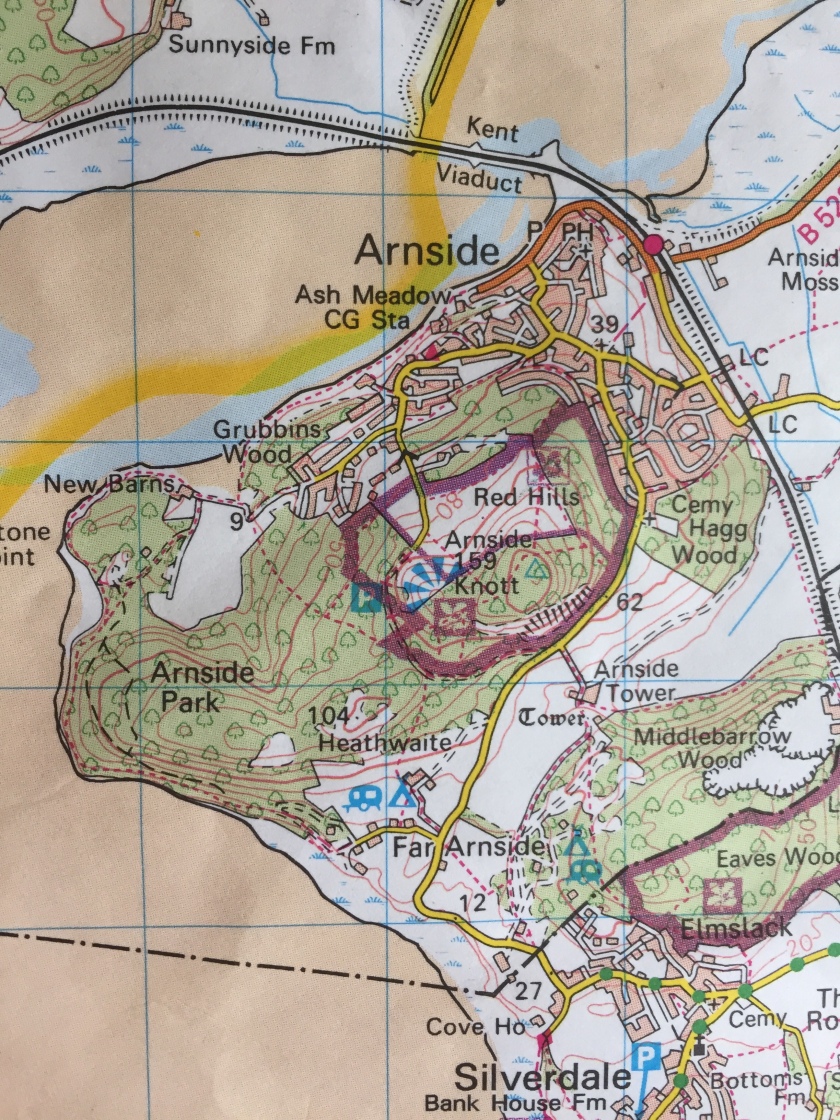