Today, The Dog and I decided to check out Wray in Lancashire.

We often drive through this pretty little village on our way to Lancaster and the coast, though we have been known to visit the little garden centre and cafe at Bridge House as well as the Scarecrow Festival in May. So this afternoon, we gave it a bit more attention.

I parked up in the aforementioned Bridge House and wandered around the garden centre, poked my nose into the little shop and promised myself a coffee and cake after our walk. We went onto the street, crossed the bridge and dropped down by the river. The Dog galloped straight to the river and stood in it. It’s just above freezing. She wanted a stick thrown so she could swim after it, but it wasn’t going to happen, it’s far too cold – I walked off and her pricked up ears dropped in disappointment. It didn’t last, she soon overtook me and bounded along the path.

We soon came to a gate into a field of sheep, so The Dog went back on lead and we walked together, following the river Hindburn. We passed the Environment Agency’s flow monitoring station and then towards the main road. Here we paused as I had spotted a couple of stone slabs – one marked Meal Bank Bridge and the other with a cat like head carving.

I was intrigued and looked for clues. I had a little pamphlet from the Forest Of Bowland about Wray that mentioned that visitors could “follow the carved stone way markers with images depicting the local landscape and wildlife. The images were designed by the local schoolchildren…….” but there was no further information of how many and whereabouts they were on the route I was following. I also spotted daffodils starting to sprout under some trees which I was surprised at – it’s was early January, far too early. But we had had a very mild Christmas so all the plants think it’s spring. I crossed the road determined to Google about the stones later.

I found this later at home about the Meal Bank Bridge. It was one of the many bridges lost in the great flood of 1967.

We followed a muddy bridleway between two fields away from the village and let The Dog have a run. We approached the sewerage works by the river and discovered yet another stone carving. The Dog discovered another path. We followed it, but it just led to the river and a dead end so we retraced our steps. I hadn’t planned to deviate, but we found another path on the other side of the water works and we followed that through a couple of fields, found a track that led us back towards the village. We found more stone carvings.

We wandered back into the Main Street. I wanted to walk further, so we branched right up towards the school. It’s a tiny little school – they have an admission of 7 children per year and about 4 teachers plus the Head. How wonderful is that. Its made up of the village children and children from the surrounding farms. It had a lovely plaque over its door too. 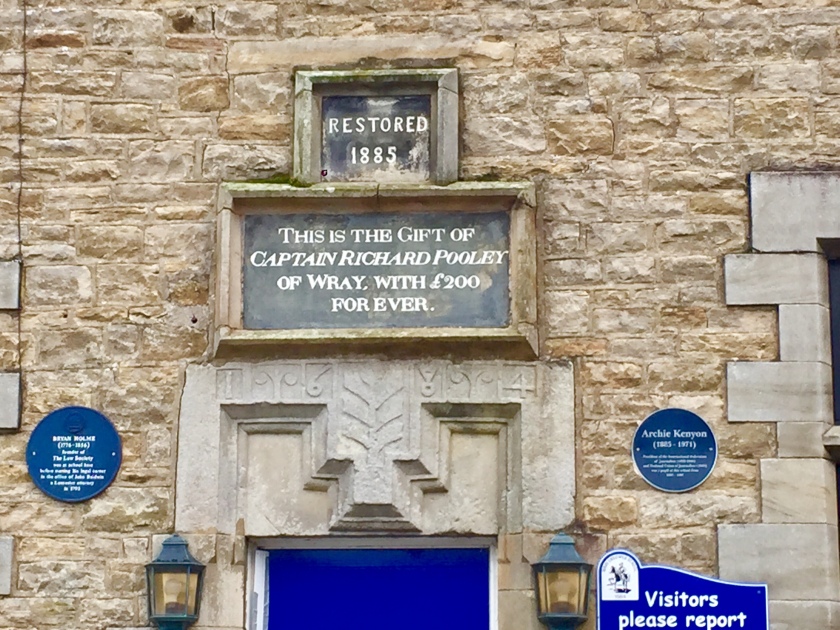 Our school dates back to 1684 when it was founded by Captain Richard Pooley. Richard Pooley followed a successful career as a soldier of the Parliamentarian army under Oliver Cromwell, and after being made a Captain by Cromwell at the Battle of Worcester he returned home to Wray. On his death he left £200 for the endowment of a free school for his village. A local farm was purchased, the income from which was invested and used to build the school and to pay a teacher to provide an education for the children of the village. The school was rebuilt in 1885 retaining many original features.

I stood looking at the school with its tiny front playground, wandering around the side road to the front entrance and another play area, wondering what it’s like to be a pupil there – instead of having 30 classmates, you had half of that or less. I carried on with our walk, down a little footpath and towards the River Roeburn that flows into the Hindburn. It’s like a little gorge. On the road, houses cling to the sides, their gardens disappearing towards the river. It’s here that I spot a lovely little sign.

We head back into the village and to the Bridge House cafe for a mug of coffee and a choice of cake. It’s a lovely, cosy little cafe with friendly chatty staff. Today, I chose a lemon and orange cake which was infinitely better than the courgette and avocado offering. 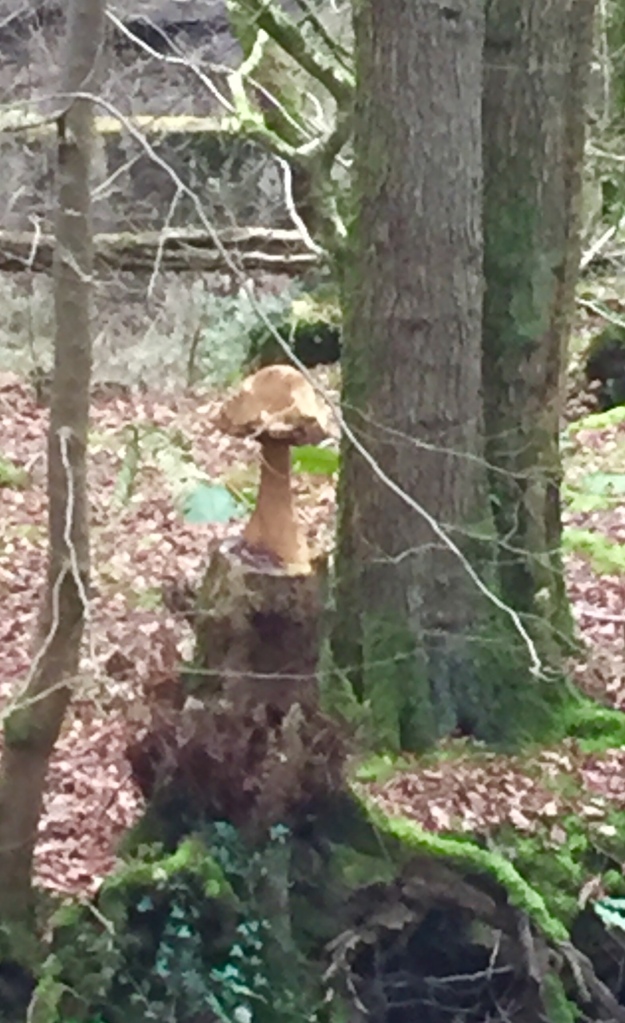 I spotted this wood carving in the woods by the Roeburn river – it seemed to be in a private area so I didn’t get close. Seems that a tree was felled and someone has carved the fungi on the top. I just love coming across these little unexpected pieces of art work, wondering why they have created. It made me smile.

We had another wander along the Main Street, primarily because I wanted a photo of it. The picture doesn’t do it justice and the cars spoil it, but it’s really charming in real life.

I also took photos of the other carvings as I came across them. There were probably more, but I didn’t see them. 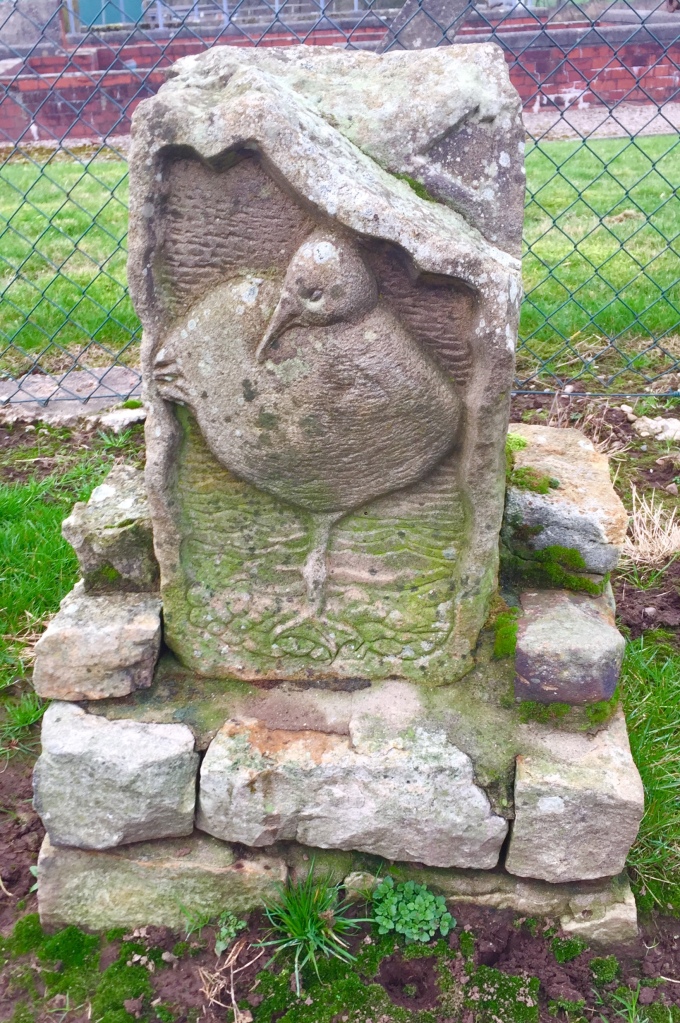 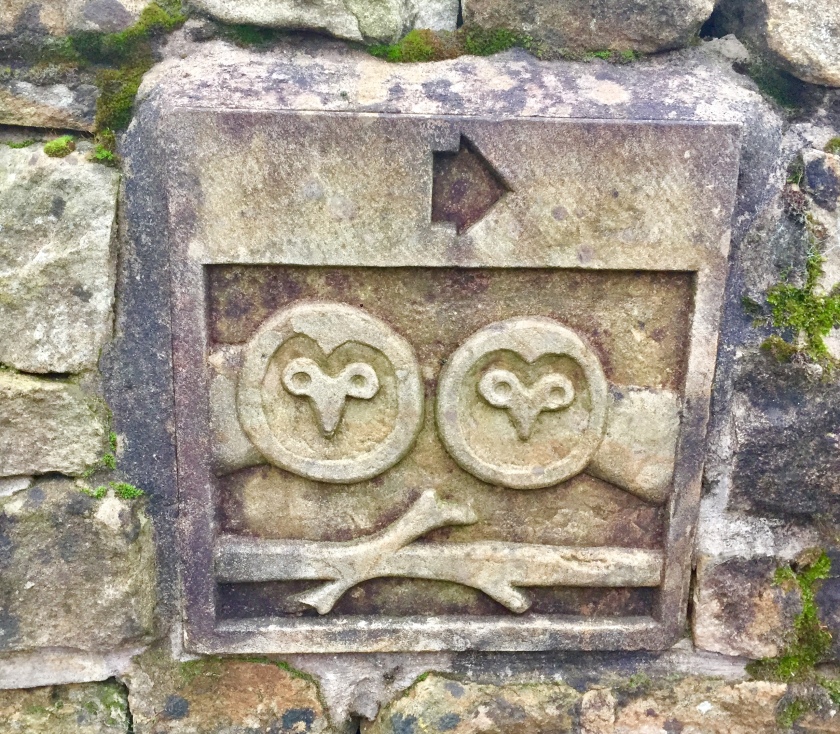 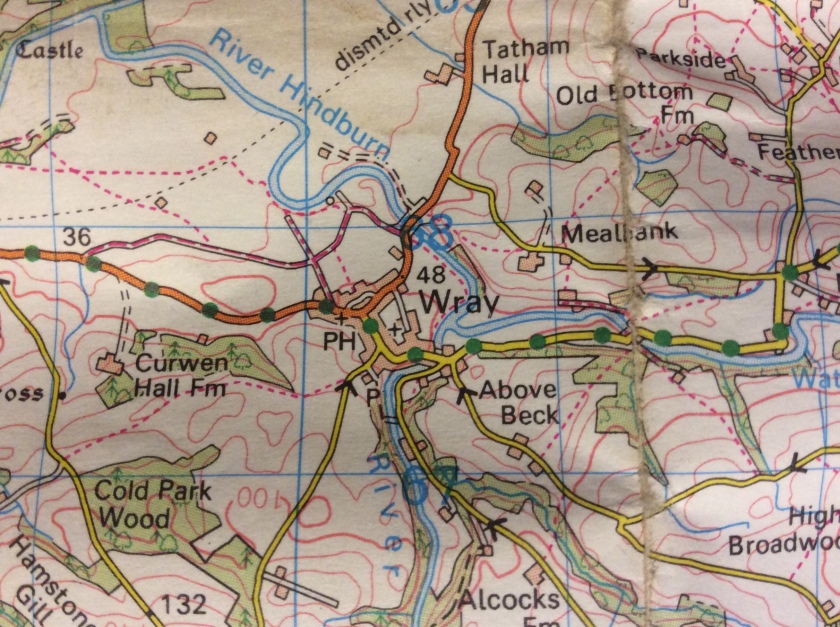