Today, The Dog and I drove towards the coast and decided to walk along the Lancaster Canal. It is within spitting distance of Hest Bank, where we parked last week to walk along Morecambe Bay. Here, you can walk north towards Carnforth or south towards Lancaster. We have a tendency to walk to Carnforth so we made a change today. The path leads out into fields and country between Hest Bank and Lancaster whereas the north route tends be more suburbia, lined with houses with their gardens backing onto the canal path. I don’t mind as I can have a good nose into people’s houses and gardens. It’s amazing I haven’t got a cricked neck. My friend would say I was inquisitive, curious and wanting more knowledge where my hubby would say I was just bloody nosey. I fear the latter is true.

A glorious spring day and I mean it. Yesterday was rubbish – rain all day, wet and soggy. This is the trouble with our little island nation – it has a lot of difficulty what weather it wants. Yesterday was cold, damp and wet weather clothes, today warm, sunny and the braver types in shorts and t-shirts! Yes, people were either wrapped up like it was the Arctic and others as if they were strolling along the beach front in Benidorm. It’s so extreme and topsy turvy our weather and I regretted my extra layer (after a lot of umming and arring on what to wear).

It was wonderful – the birds were singing their little hearts out, little yellow anemones were blooming, Hawthorne bushes have started to show their vivid green leaves and it felt that finally spring had won and overcoming winter – things were greener and brighter. Lovely.

This little bird fascinated me. He caught my eye when he dived under the water and I waited for him to bob up again. He didn’t and I was thinking what an amazing bird for holding his breath for so long, when he reappeared some 50 foot further up the canal. Almost immediately he dived again and I ran to where I thought he might appear to get a photo. I was badly out in my calculations. He was so quick and the distance he travelled under water was incredible. The Dog and I followed him along the canal, watching him bob up, take a breath and dive and reappear further along. I just managed to catch him here though I was still out of position and he was quick. 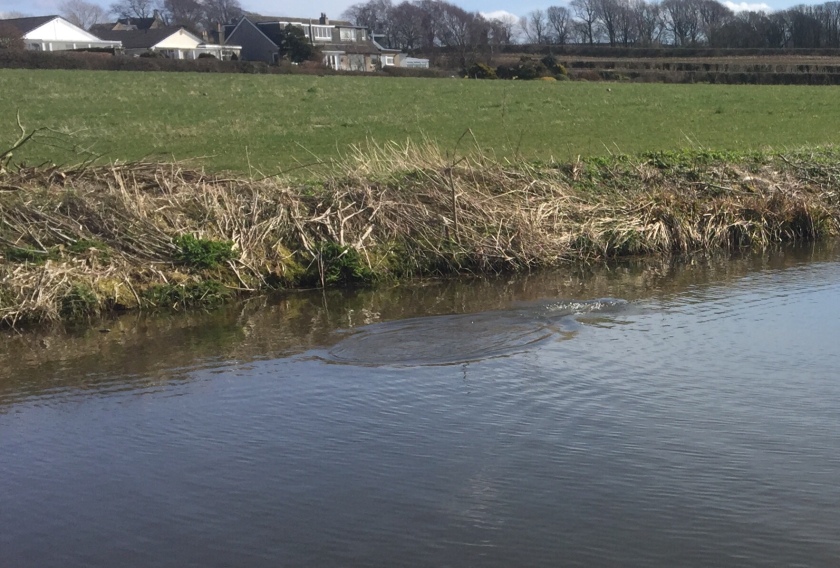 The Dog enjoyed herself immensely as it was the first time she was able to swim. It’s been just far too cold. She happily swims after sticks and also dredges a few out of the canal itself. She did drop one of her sticks back into the canal by accident and then preceded to bark at me to retrieve it for her. And stupidly I did.

There’s not a lot to tell on a canal really, but a couple of years ago, this road wasn’t here. It was just green fields, but groundwork’s had just started and my heart sank. Another bit of our green and pleasant land nibbled away. It’s the new Heysham/M6 link road that bypasses Lancaster which on one level is good as Lancaster is awful to get through, but look what we have lost…….

To make us all feel better, the construction company has planted thousands of plants (landscaping I think they call it) and encased them in green protective tubes so the saplings don’t get savage by rabbits and other ravenous creatures, so in years to come, it will be all wooded and you would never know a raging bypass was there. Do they ever work? For years afterwards, there’s still stubby little green tubes, now falling apart and depositing plastic everywhere and the plants have failed to flourish. There never seems to be anyone looking after these plants. Almost a tick box exercise……

Then I saw this and thought – you might have a point there, mate.

The Dog and I walked for over an hour one way, finally turning around when we reached the Lune Aquaduct, where the canal goes over the River Lune. Another thoughtful information board.

The River Lune looking west towards Lancaster, Morecambe and the Irish Sea. It’s all very industrial on one side of the bank. You can see a factory spewing out smoke on the left. 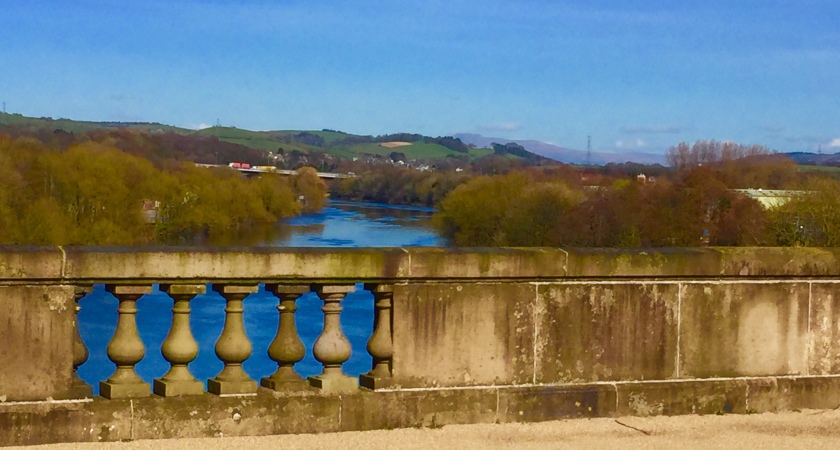 And east, in the far distance you can see Ingleborough, one of Yorkshire’s Three Peaks, poking its head above the hills and the edge of the Yorkshire Dales.

They don’t make bridges like this anymore. True Victorian workmanship. Today, you would get non descriptive concrete blocks and girders. (See the Heysham/M6 link road above). Absolutely beautiful. 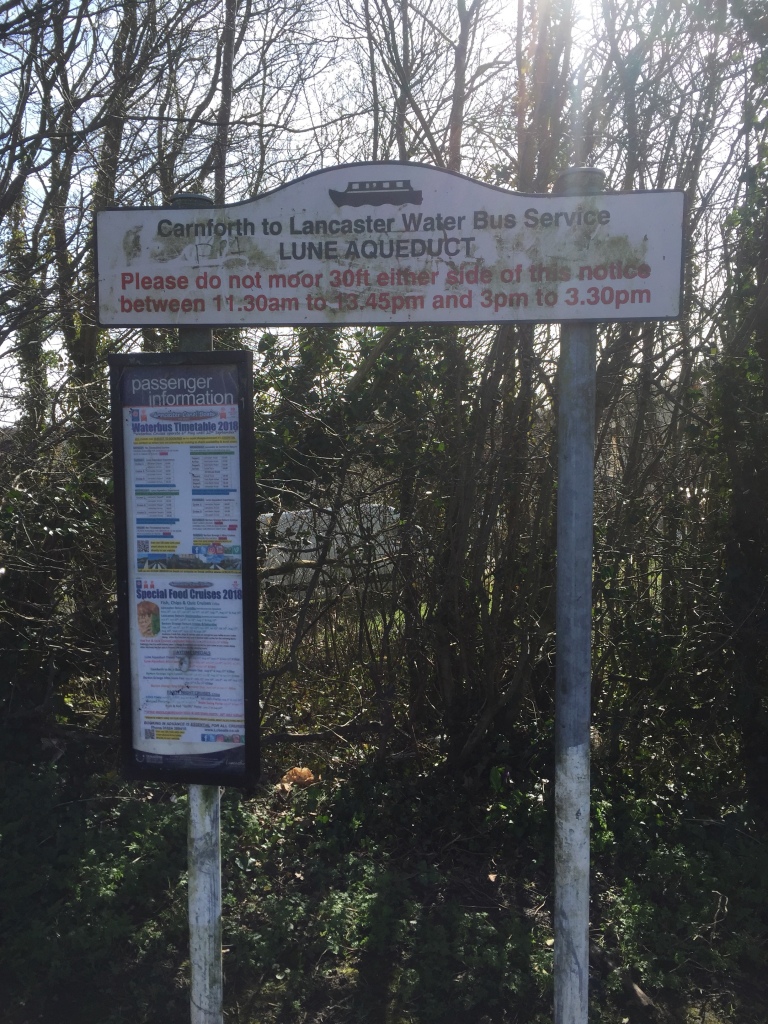 The Dog and I were tempted to get on if they were running. A canal bus – how brilliant!

By now, The Dog and I were well on our way back to Hest Bank. In the background are the Lake District fells. Stunning.

Cows enjoying the good weather while it lasts. Feel so sorry for all the sheep and cows outdoors in this appalling weather. I did shout at these guys to stand up as apparently it’s a sign of bad weather if they are lying down……..

This is coming back into Hest Bank with all the canal boats moored up. I’ve always had this dream to live on a canal boat and be a bit nomadic, just cruising around and stopping wherever. Sounds so romantic. In reality, it probably isn’t and you’d end strangling your partner because you’re on top of one another. Maybe a week’s holiday to test it.

And a colour picture, because I can.

And if you look closely, at the bottom of the road, is the level crossing for Hest Bank, when we did our beach walk last week!

A lovely stroll with no hills, with great views across Morecambe Bay and the towns of Lancaster and Morecambe coming into view. Even better in perfect spring weather. Enjoy.