Today, we decided to check out the Thurrock Thameside Nature Park, which is part of the Essex Wildlife Trust. It is located on the north bank of the River Thames, south of the town of Stanford Le Hope.

This area, sandwiched between Tilbury and its docks and Corringham and a huge deep sea wharf, is a little gem of nature, surrounded by industry. It is mainly marshland, ideal for ground nesting birds and it’s being developed to stretch along the Thames estuary. I believe it could be an old landfill site.

We parked up in the generous car park, after following country lanes and our noses. It was a beautiful spring day and the first day of significant warmth. I was itching to investigate the whole area, but was scuppered by an elderly relative, so we kept around the visitor centre.

We soon discovered that apart from having a cafe, you can walk up to the roof by walking around the sloping walkway that encircles the outside of the building. From here, there are 360 degrees views across the Thames to Kent, the vast and dominating cranes of the deep sea wharf, views upstream towards Tilbury and beyond and looking north, the swathe of marshland and the town of Stanhope and other communities.

The morning was quite hazy until the sun won, but here you can see the huge deep sea wharf cranes. Originally it was known as Shell Haven and was a huge oil refinery. I remember seeing the huge chimney with flames from the top of it, as the they burned off the waste from the refining. Now it’s all changed and massive development is afoot.

Looking towards Kent across the Thames. Here little boats lie on their side, waiting for the tide. The river bed is very muddy and full of channels. Ideal for wading birds – apparently every square metre of mud is the equivalent to calorific amount of a Mars Bar in bird terms.

The more I looked, the more I realised how much history and interest this area is. I grew up around here, and for years just thought it was an industrialised wasteland. But returning as a visitor, it dawned on me how amazing this place is, that industrialisation on a massive scale can live next door to nature and I could be, in fact, in the middle of nowhere. Industry has always been part of this area for many many years and will never go away, but I was pleased that this little pocket would be too.

The tide was out, exposing the mudflats of the Thames. However, it was on its way in and surreptitiously crept in within an hour.

We wandered down to the bird hide near the rivers edge and watched a few birds on the feeders and the lorries heading into the deep sea wharf. The sun had come out and it was very pleasant. A very interesting place.

I have a Wildlife Conservationist in my family and the day before she had spotted a peregrine falcon at Tilbury Fort. So we went back to check that out.

Tilbury Fort is steeped in history and overlooks Gravesend on the Kent side. Again, it is surrounded by industry and towns. It abuts Tilbury Docks, which has seen a massive transformation over the years. A busy and major port in the early 20th Century with a cruise liner terminal, it seemed to decline. But now, huge warehouses like Amazon are popping up, the roads are full of articulated lorries and cruise liners still dock at the terminal. New roads have been built to service the warehouses and new homes are being built.

The entrance to Tilbury Fort. It’s part of English Heritage so there’s an entrance fee. We didn’t have time to investigate further unfortunately, so just snitched a few photos.

It has several examples of cannons from its earlier history inside the grounds, but on the banking outside there are several gun turrets which were part of the defences in World War 2, together with Coalhouse Fort further down the river. 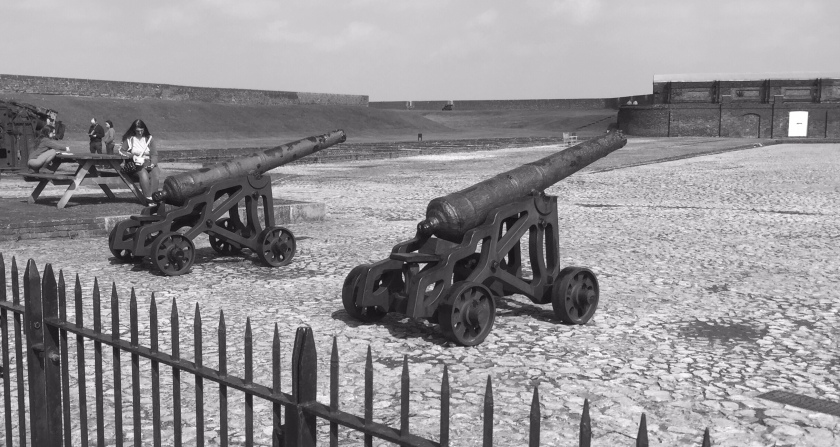 It’s certainly got a chequered history.

And then crazily, right next to it, is a huge Power Station and mankind’s massive mucky handprint. The Power Station has been decommissioned and in the process of demolition, but we think that the peregrine falcon could be making it his home, which would stop any work. The large crane on the ship has been docked there for months apparently and I couldn’t find out what it is for.

There is a river side path, that runs along the rivers edge which we followed for a little way and I think you can get much closer to the power station, but we had to consider our elderly relative. But iagain felt there was so much more here, once you dig beneath the surface and looked beyond the ugliness.

Looking west towards Tilbury Docks. The jetty in the foreground is for the ferry service to Gravesend which has chugged across the river for many years. The two little boats that ply the service aren’t in the best condition, but saves you driving all the way up to the Dartford Crossing and £5 toll. Beyond that is the top of the cruise terminal – many a time I’ve watched huge cruise liners docked there and wondered which exotic destination they were heading.

I just love those beautiful wind turbines. I find them graceful and elegant. They are a bit like Marmite – you either love them or hate them. I love Marmite too.

I have only scratched the surface of this area. First impressions are not good, either way you come in. Busy, littered, noisy, not the most beautiful and scenic place in Essex and not really inviting you to linger. But do linger and investigate – walk along the banks, look at the docks, cross the marshlands and look at the history of it all. It’s all there, just needs finding. A fascinating place. Enjoy.